Holiday travel. Every year I say never again. Yet every year I find my hands on the wheel. Sure, getting away is fun. Seeing family is great.  But the getting there, that is tough sledding. 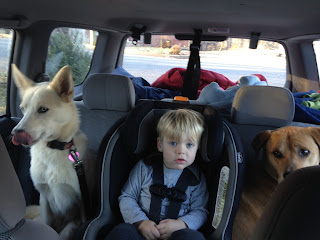 It starts with a three year old. Not easy, right? Add two dogs, one on each side of the little guy and now we’re getting close. Okay stuff the car to the gills and then pretend that you abhor being confined to a seat for more than a half hour or so.

I'm sure that some of you out there drive all the time, and you may like nothing more than hitting the open road at full speed. Well, God bless you for it. Me? No, not my thing. I-81, with its steep inclines and trucks and constant road construction? I’d rather chew on a rusty wad of steel wool.

My whole family was packed into that car. The only thing missing was a jar around my neck with our two little goldfish. One wrong move, me or the other guy and well...it’s more than my nerves can take. That’s why I chug along at a paltry 68-72 mph. I pass cops with a smile. The Fast and the Furious? I’m not what would be considered the ideal demographic.

Our journey began in Virginia and ended in the North Country, a mere 50 miles from the Canadian border. All in all it was something to the tune of 26 hours in that car with stops at the downtown Hilton in Scranton, Pa, both there and back. And By the way, those good people at the Hilton are top notch, and I highly recommend their hotel if you’re travelling with pets. Last time up  I chose a roadside motel to save a buck with the expected results.

But nope, this time we spent the extra money and got fancy. Two queen beds meant one for mother and child and one for man and dogs. It's funny because I used to leave a hotel room in a daze. A fog of cigarette smoke hanging and a string of beer cans strewn along the floor. Now it's Goldfish crumbs and baby wipes.

Dogs. Boy was that something. After the first time they flat out refused to get back in that elevator. A fool-me-once sort of deal. So then it was three flights of stairs whenever I had to let them out or in. Other than that they were well behaved. Even Mason, our neurotic husky mix did okay. A few pants and some trembling at times when traffic got hairy, but hey, the same went for me.

The kid. He did great too. Minimal napping and maximum discomfort, and yet he handled most of it like a champ. At one point, there was us, in the empty hotel lobby/bar, drinking a draft and trying to de-frazzle ourselves while our kid played with his tractor on the floor. Sure, there were those times on the road, when he’d yank at his car seat belt while shouting, “Get me out of here!” Then again, I did the same thing.

On the way home—which became the longest effing trip home since trips and homes and roadside mowing was invented—we hit a snag in traffic and came to a lurching halt on the interstate. My son, awake but weary, piped up from the back.

Home. There’s nothing better. Walking into that familiar place, with its smells and sounds and comforts. With its absence of traffic and lurking dangers. Where the dogs sleep without worry and snore through the night. Where the stress melts away. Where my kid isn’t tying a leash to the hotel chair or eating with a plastic spoon. Where there are no elevators or parking garages or check out times. Home. Where all is well.

This is the newest question in our house. Whenever I tell my son not to do something, like, say not to throw his food. He’ll stop mid-throw, sort of tilt his head at me, and then,

Then, fifty percent of the time at least, bread takes flight.

But I am happy. Happy that he’s happy. Mostly, I mean there's always the occassional crushing blow for an almost three-year-old: Bedtimes, bath time, words that end with time and don't begin with play. Maybe when he can’t have a cookie, but overall, yes, he’s happy. So I’m happy.

His newest activity is riding a bike around the house. And by around I don’t mean literally, but more through the house. Down the hallway, into the kitchen, peddling away down the living room and making a hairpin turn back around again. And the imagination this kid has, the other day he fell, and got all sorts of upset because he dropped the imaginary cookies he was bringing to me.

Sometimes it can be hard to keep track of what's going on. I mean, it can be alligators roaming the living room, a lion down the hallway. The bike mysteriously “smokes” and has to be repaired. Oh, and anything can become a lawn mower.

The other day all of this was happening, nearly simultaneously, when I looked at my wife.

Can you believe this? We have a three year old.

Almost three at least, and man the house is jumping, with the alligators and all. My wife and I were thinking about calling an exterminator, but our son spotted us talking, like adults, and came to a skidding halt on the bike.