The Worst Halloween Ever

Okay *deep breath* it’s been two years, so I guess I can talk about it.

A cruel joke in the year of Covid. The year of Zoom. The year of virtual school, work, shopping and family gatherings. For our family, like most, it was a year of setbacks and change and continuing global crises. Of learning on the fly. The only good thing, besides daytime pajamas, was the tiny little addition we were expecting. 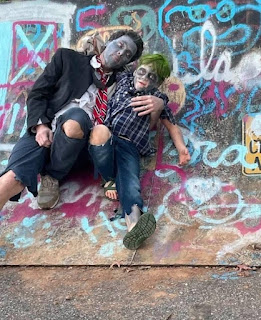 Our baby girl arrived in September of that forsaken year and her seven year-old brother was thrilled for about fifteen minutes. A newborn baby is, for a seven year old boy, boring at best and annoying the rest.

Obviously, Halloween was going to be different. With Covid running rampant, trick or treating was more or less cancelled, as were parties and gatherings and anything to do with real life living, breathing people. Still, I wanted my son to have some sort of Halloween experience.

I took him to get a costume. We ended up with this half Jawa, half grim reaper type thing that under normal circumstances I never would have bought. We bought our own bags of candy. We got pumpkins and watched movies and had a fire out back and the leaves were flying around and I was thinking, Well, maybe this won’t be so bad.

After some scrambling, we caught wind of a community farmer’s market a few miles up the road in the county. They were having some kind of costumer/candy party scheduled for around seven that morning. Yes, morning, but again, we were desperate, and so we packed up the car with the brand baby, stroller, along with our pint-sized grim reaper and decided we’d make the best out of it.

When I think of a farmer’s market, tents, fruit stands, some old guys in overalls and maybe a little country band comes to mind. Or maybe I’d been watching too many Curious George reruns. Either way, what we found was not that.

Tables scattered along a path. A few local businesses. Insurance. Realtors. It was maybe forty degrees and oh yeah, it was seven in the morning.

Out of the van, my kid ripped off his mask and surveyed the scene. I set a hand on our little jawa's shoulder as he shrugged, deflated, his little Jack o' lantern bucket empty as sea shell.

The baby in place, we trudged on, stopping to sniff some homemade candles. And we made the best of it. My kid collected maybe four pieces of candy (although one was a cough drop), before the baby had had enough and we packed it up and headed home.

We tried. We played spooky Halloween music. We carved pumpkins at the dinner table. We even ordered pizza and planned to have a fire with a giant sack of candy. I let him fill that bucket until it spilled. I thought it was going to be okay. Not the best Halloween in history, but with enough junk food and candy and activities to get us through it.

Then came that magical time of a fall afternoon, when the sun was slipping down and the air was cool and crisp. It was that time we'd normally be getting ready to set off for trick or treating. But we weren't, we were in the dining room, where the table was covered with newspaper and pumpkin guts and how many times can you listen to Monster Mash and Thriller when you knew that was it? It was all too forced. And then the baby started to cry. She was wailing away and Mom had to rock her and it was like something just kind of cracked. I glanced down at my son and his eyes full of tears.

And I couldn’t blame him.

Here was a seven year-old kid who’d taken everything the world could throw at him like a champ. He’d adjusted on the fly, absorbing closures and cancellations and life-changing events and readjustments by the week. The world. School. Home. His family. He hadn’t been in a classroom since March. We’d added a family member. We were always packed in the house on top of each other. Now no Halloween? It was too much.

We’d marveled at how well he’d been doing. We made jokes about how easily these kids navigated the computer. He’d come accustomed to meeting people through pixels and internet speeds. Now he’d lost Halloween. This wasn’t fair.

Hell, I was crying with him.

But now here we are again. We're ready and willing and we’ve just spent a small fortune on a Darth Vader costume. And yes, we went trick or treating last year but that 2020 Halloween will take five or six more trick or treats to get over. So bring it. Rain or shine we’re getting out and knocking on some doors.

A Tale of Love, Loss, and Rock and Roll 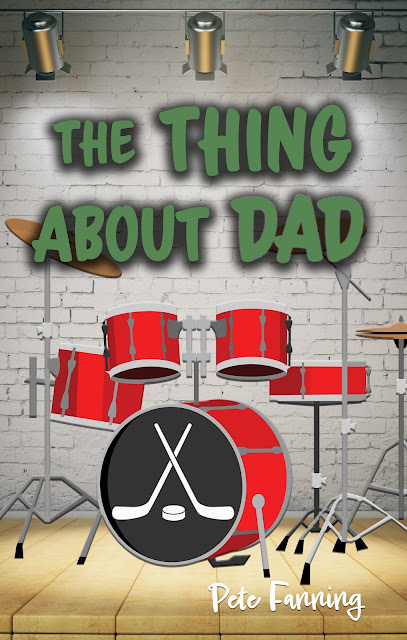 My middle grade novel, The Thing About Dad, is out now and available everywhere. Here's the summary:
For thirteen-year-old Jack Lansford, moving from upstate New York to Virginia is a prison sentence. At least that’s what it feels like when his dad takes a job down south and asks him to “give it a year.” Moving in, Jack's misery turns to confusion when he stumbles across a box of letters to his mother that forever changes the way he sees his light-hearted dad.

As close as Jack is with his father, they never talk about Mom, or the car accident that took her life when he was only three. So Jack can’t help himself from sneaking back to the journals—pages of heartfelt confessions about the mother he never knew. School begins and Jack tries to find his place—playing drums in the basement band with his dad and the neighbors while making a few friends along the way.

Jack confides in Miranda, the girl next door with the voice of a young Aretha Franklin. But when he shows her a poem his father wrote about his Mom, she decides it’s the song they should perform at the local band jam. With that, The Wallywalkers are primed for the big time, but first Jack has to summon the courage to have the talk of all talks with his dad.

There’s something to be said about my baby Bella’s room. The books, the blocks, the crib, the loopy swirl of her name on the wall. It’s like a separate universe in our house. In Bella’s room we sit on the floor. We use our imagination. We play with stuffed animals or Barbie's. We don’t think about all that stuff on the news.

There’s a lamp on, casting a cozy glow over us as I look at my daughter, into her wide, all-encompassing eyes. It’s where I find the absolute best in humanity.

After a while she’ll crawl to me, bash into my chest then slide down and bury her little head in my lap. I’ll stroke her little tuffs of hair and her back while she murmurs softly. Then she’ll look up and say something like, “Blah.” Her mix of ball and dog.

I say it back to her. “Ball.” She smiles, coming alive. She crawls around, muttering to herself, pulling up on the dresser or crib as we talk colors and shapes. We point at things that spark our interest: a book, a shoe, the ceiling fan. Outside it might be raining, or hot, or windy or dusk, but it doesn’t matter. Not when we’re in her room, with the lamp on, talking shop.

When I’m in Bella’s room, I’m not thinking about work, or writing, of past failures or even worrying about Covid. I’m content to play and sing and laugh until she gets hungry or tired or simply grows bored with me.

My little girl's room is a safe place, for her, but for me as well. It’s where time stops and holds still in our laps—even as she’s growing so quickly. Where we wind up the music box and let its clicking melody pull us away. It’s where bears talk, turtles fly, monkey’s dance and I can take a moment to catch my breath. 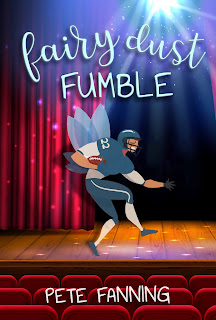 Twelve-year-old Colton Clutts is looking for a breakthrough. But as the third-string quarterback of the middle school football, he team does himself no favors when he agrees to play the part of the fairy in the school play. Clad in tights, wings, and armed with a wand, Colton achieves school-wide fame after he tumbles off the stage during rehearsals. If that isn’t bad enough, a drafty backside incident on the football field quickly goes viral.

Things at home aren’t much better. Colton’s little sister thinks she’s a witch. She casts protective spells for Colton because she’s convinced he’s cursed. But when she stumbles upon a spell that actually works—turning theater-issued glitter into magical fairy dust—things start happening. It begins with crazy slam dunks in gym class, then Colton runs wild in a middle school football game. Just like that, Colt-the-Bolt is born—a superstar athlete who gallops into the record books.

For Colton, it’s a dream come true. But a feisty school journalist is chasing the story. And Colton’s sister no longer wants to be a witch. His drama crush isn’t interested in a superstar who’s skipping out on play rehearsals and his best friend is tired of being the sidekick. With the varsity coach calling and ESPN proclaiming him a “phenom,” the Colt-the-Bolt trend is nothing but a big glittery mess. And now, with the spotlight awaiting him and the fairy dust dwindling, Colt finds himself onstage and completely out of magic tricks.

Release date is 7/6, but for now here’s an excerpt—after Colton’s little sister has “spelled” his stage prop glitter and he realizes his new magical abilities:

The blitz comes storming and there is nowhere to go.

Correction. There is nowhere for a mere mortal to go. My

feet, however, have other plans.

They take me left. And when I say they, I really mean it.

My feet are driving and I’m only hanging on for the ride. A

middle. I slip between two hefties but more come calling.

At the last second, I catch a glimpse of Harrison streaking

down the sidelines with a couple steps on his guy.

I chuck it with everything I’ve got.


The pass flutters in the wind. Harrison slows, his

facemask to the sky as he makes the adjustment. A roaming

defensive back converges on what should be an easy

interception. What happens next will be discussed for


Doing all that running, I hadn’t put enough muscle into

the pass, so the ball floats like a sagging balloon at a parade.

The safety arrives perfectly on time to make the play, but

it’s like someone has hit the pause button. The balloon

slows to a magical stop in midair. I mean, the football halts

and hangs there, like a cloud, until the poor safety goes

crashing into his own bench.


Only then does the football drop safely into Harrison’s

hands, where he stands stock still, looking down at the ball

like it’s a meteor rock. Hundreds of jaws drop in complete

silence. Finally, Coach Barber cries out for him to run, and

he mechanically jogs into the end zone.


No one chases Harrison. Probably because no one

knows what in the heck they’ve just seen. Me included.

Without peeling his eyes away, the referee slowly finds his

whistle and eventually, cautiously, raises his hands to signal


Both sides of the bleachers are as quiet as a library
Posted by Pete at 1:34 PM No comments: