I’m by no means a perfect parent. I have plenty of impatient, un-blogworthy moments. I get frustrated, baffled, and feel overwhelmed as I try to navigate the waters of fatherhood. But still, I’ll always try to be the best parent I can be.

I was at the gas station the other day. It was a mild, easygoing Sunday afternoon. A lady was leaving, pushing a stroller. A boy of maybe six followed. By the way she spoke to the kids I’ll assume that she was the boy’s mother. On the way out of the store, the boy bent down to study something in the parking lot—a bug, leaf, caterpillar or something—and the mother lost her sh*!. She exploded, shouting for the boy to hurry along. The little guy tried, but he was having a time peeling away from whatever it was on the pavement. So she stomped over and yanked him along.

I’m not going to pretend that I thought the world was perfect or anything. But come on, can’t why not give him a minute? They were walking, there was no fire that I could see, why not let the little boy take a few minutes and look at something that catches his eye?

Again, I have plenty of flaws. Just the other evening, on my watch of course, my son took a spill into the fire pit (there was no fire) and scraped his leg. I’ve knocked him down hovering too close at the park. And I’ve been in a rush while dropping him off at daycare on mornings where I was running late. But still, I always give him a minute to explore—to take a second and appreciate a bug. A stick. A rock. Especially now. Because in a few years I won't remember my long boring day at work or whatever mundane thing I was doing. But I’ll remember my kid. And I want him to remember his childhood as a wild learning ride, not a rushed parent.

*And now for the preachy conclusion to this post.

Maybe that’s why a lot of kids grow up without an appreciation for their surroundings. We always hear how they litter and don't respect nature or the world in which they live. Maybe because they don’t know anything about it.

My wife teaches second grade, and I couldn't believe it when she told how many kids have never even squished Play-Doh around in their fingers. How can we not have time to let our kids play? What could be important to us than them? We stare at phones constantly. We check our apps and our statuses and immerse ourselves in meaningless blather. So the least we can do is let our children check out their surroundings every once and a while. It’s amazing what sticks with them.

Okay sorry. Where were we?

After the gas station incident I let my son play with an ant until the ant finally scurried up a tree and escaped. And you know what? The next time he was outside he went right for the tree, bypassing his toy mower and big wheel and bubble machine. I sat down in the grass, barefoot and smiling. My son was looking for an ant.

It's Hard Being the Favorite...

My back is aching. I haven’t eaten a meal at the house without thirty pounds of wiggling on my lap all week. I’m requested for diaper changes and hand washing. In the evenings he comes to me with a book, then calls out for me in the darkest hours of the night.
Let me just say, it’s hard work being the favorite. 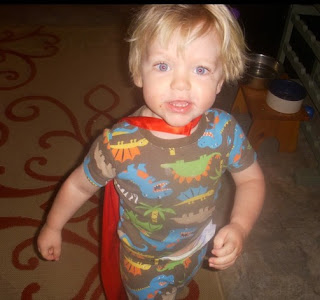 Poor me. As the father of a two year old, the parental tide has turned in our household. Mom, once the sustainer of life, always the nurturer and steady caregiver, has found herself dropped to second place in favor of a chump. Don’t ask me how it happened.
I remember when he was stuck to Mom’s chest, how people told me not to worry, that my turn was coming, how little boys tend to want Daddy around this time. And don’t get me wrong, I love it. It’s just a lot of work, is all.
Yes, I know, I deserve to be laughed at for saying it. I’ve had a pretty easy ride here. I was the one heading out to play basketball or sleeping soundly through the night while my wife lugged the little guy around in her belly. I’d flop and flip and stretch out while she was stuck on one side, her back a wreck and her ankles swollen. After that it was her breast feeding and soothing voice that kept the baby from crying.
She was a natural. I was terrified.
And here I come along, with my fart jokes and cheap slapstick comedy routines and the little guy has stars in his eyes.
That’s gotta hurt.
Because Mom's the one who knows just what to fix him for dinner, while we play hockey or basketball in the hallway. Sure, I carry my weight and all, but still, I’m kind of just a big clown.
And I'll even let you in on a littel secret: Mom is actually the fun one. For the first year of his life I was what one might call, overprotective. I developed a newfound affinity for bubble wrap. I didn’t want my kid to be outside for fear of a falling satellite (It could happen). I told anyone who came near to watch his head, (that soft spot just kind of freaked me out).
I may have even been what you would consider, a stick in the mud. And now that he’s running and gunning I swoop in like I'm Captain Cool? Man, what a cheater...
So she shouldn't worry. Just sit back and enjoy that silver medal. Because the tide will turn again, I'm sure he’ll come to his senses and realize that Mom’s pretty good stuff. How could he not? He’s seen what I do to a grilled cheese sandwich, or my confounding attempts to fold his little shirts. And that lid on his sippy cup, what is this, a puzzle? I’m good for chasing him down the hallway or making up silly songs at breakfast. But certain things I just can’t do.