We’ve all heard the dangers of too much screen time for children. TV, tablets, phones and game systems. How often do you see kids (or adults) zoning out with a phone in their hands.

At our house, we’re hyper-vigilant about this sort of thing. But then again, we’re not. 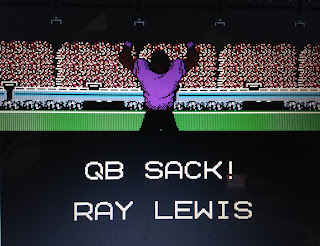 We don’t let our kid play on our phones. If you do that’s cool, we just don’t. In fact, I make a conscious effort not to be on the phone in front of my kid. I don’t even have it on me when we’re together. Why would I? What am I missing? A post, some terrible news? A witty comment on Twitter? Nah, I’m good.

Okay, so what do we allow? Well, glad you asked. The short answer?
Tecmo Bowl.

Yeah, that’s right. It’s actually Super Tecmo Bowl, released in 1991. When I took on my new job s a computer technician, I started tinkering with my old one in the basement. Simon and I would take out RAM, the harddrive, simple stuff he enjoyed doing. I taught him how to change and create passwords, profiles, set screen protectors and backgrounds. We’d pretend I was a new guy at the job and he’d help me get logged in. What can I say, we’re dorks.

Then one day he noticed an emulator on the desktop. “Dad, what’s that?”

“Oh, that’s,” I couldn’t control myself. I fired the thing up and began. “So look, this is how you play Super Tecmo Bowl on the computer. It's actually a rigged up 2013 version of the classic, and I had to teach him how to use the keyboard as a controller. I figured he’d play it for five minutes and that would be the end of it.

As it happened, my son fell in love with one Ray Lewis. He's walking around in a 52 jersey, baffling kids and confusing adults, probably wondering why a six-year old is going on about a guy who retired five years ago.

And not just that. The kid loves defense. We hang in the basement, on this old Windows Vista computer. He plays D and I play offense. He started asking football questions. I taught him about the downs, punting, special teams and reading a defense. And I have to say, I never realized just how complex the game of American Football actually is until I tried explaining the difference between a field goal, extra point, safety kick, punt, and a regular kick-off to a six-year old.

Believe it or not, it’s quality time. We go outside and play football, running pass routes and reenacting Super Tecmo Bowl. Imagine my neighbors, watching us act out a video game football contest, my son stating the physical conditions (excellent, good, average, bad) of each player before each play.

He can play offense now. He can work a keyboard, because in the old edition you have to use a keyboard instead of the controllers.

The only probable is that all of his favorite players are retired.

And one last thing that’s come out of this. So, he really likes Ray Lewis. When I liked athletes back in the eighties, I had him write out a note, asking for his autograph. We’ve mailed it off with a self-addressed return envelope. I chuckle, thinking about Ray Lewis, opening my son’s letter, finding out he’s still someone’s favorite player.

Now we wait, and I really hope it works out because it will be cool for him to see the power of the pen.