My son’s a bright kid. I’m not bragging, the little guy is just quick to pick up on things. We role play, we do comedy skits. Sometimes it’s easy for me to forget he’s not yet seven years old. 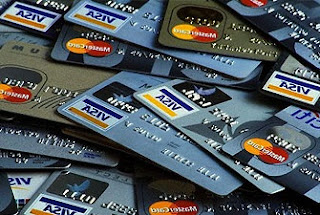 We’re eating breakfast yesterday morning. Chocolate Cheerios for him, Chex Mix for me. We sit, slurping up our man-sized bowls, and I’m going through some mail left over on the table. One of them is a replacement credit card.

I see him watching me, and I try to sneak the card back into the envelope so that I can take care of it later. Still, nothing gets by this kid.

“Is that a credit card?"

Yep. Oh, side note. He has this little prank he plays where he opens the junk mail and fills out the forms (usually in crayon) then sends the prepaid envelopes back in the mailbox, flips up the flag. He finds this hilarious. Usually, either my wife or I intercept this secret return-to-sender when he’s not looking. No harm done. At least until that time over the summer when a couple of elderly funeral home employees arrived to follow up on our interest to plan for this not-so-easy time. Oops.

Okay so yeah, credit card. I found my older, expired credit card and handed it to him so that he could put it in his wallet with his library card and at least four of my former driver’s licenses. (Yes, I know, not the smartest move, but it’s not like the wallet leaves the house). But now he’s all wound up, ecstatic, asking questions in detail. I almost thought he was going to start grilling me about the interest rate and ATM fees.

“So, how much money is on this card?”

I wave the new card in the air. “Well, until I call this one in, I’d say about five grand.”

“Really? I can buy those football pants I want?”

“And a helmet, like, the hundred-dollar helmet at Dicks?”

“You bet. By the truckload.”

Here I should’ve seen he was getting entirely too worked up. But we play a lot of games in our house, do a lot of skits. I really thought he knew I wouldn’t hand him a card and tell him to go spend five grand.

But he was flying high.

And that was it. I went to work and never thought twice about telling my son he’d just been given a golden ticket. I get home from work that evening, ready to play or hangout or otherwise have a normal evening. But just as soon as I saw him … uh oh.

I mean, right? I look around. Somebody? Anybody. It's then  I catch a look from my wife, the one that says, You're an idiot.

Eventually we get it straightened out. I explain to him I was kidding. You know, pretending. That we're living in a material world and I am a material--He's not having it. It's how a victim of one of those prank lottery tickets must feel. The guy's a little ticked about the whole deal. But we come to a compromise. Maybe, just maybe, if he does some chores around the house, gets homework done like he's supposed to, then we can think about those football pants.

It's not five-grand, but hey, it's low interest.

And then this morning, pouring our cereal, I find a sheet of paper on the counter. I must have missed it with all the fireworks last night, but it's filled with scrawled crayon, attempts at my name, printed then scratched out then printed again until it's just right.

"Oh," my kid shrugs. "I was practicing your name, for when I use the card…”