Outside, the chimney is smoking, the sledding track is glimmering slick, and the snowman stands solid on his night watch. After finally getting a significant snowfall in Virginia, we've enjoyed a string of snow day adventures.

At two, my son is enjoying the snow much more than last year. We've sledded and walked, made snow angels and read every book in the house. School was closed for a week and my wife spent regained her spot as the favorite parent. Life is good. 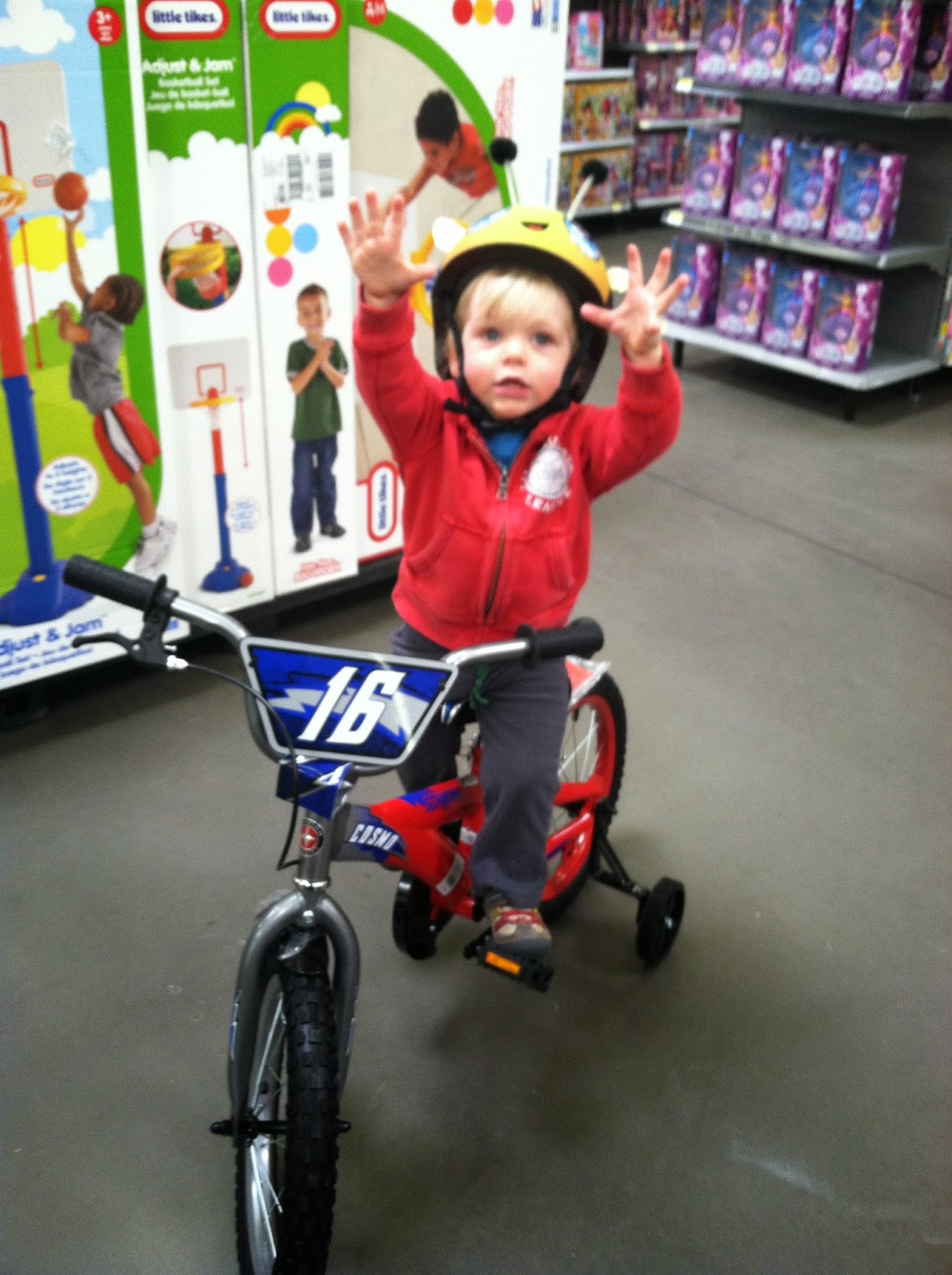 Another perk of the snowfall was empty stores. Over the weekend we had a big family outing....to WalMart.

We needed to print off some pictures, you know, like on paper that you put in frames? But seeing how empty the store was inside, my wife and I looked at each other and thought, Why not have a little fun first?

My kid’s favorite book at the moment is Duck on a Bike, which is a really cool book that I highly recommend. Only now my kid really wants a bike. We've spent more than a few afternoons in the basement, him balanced up on my Trek and me wobbling him along at a snail careful pace.

But WalMart has little bikes, and our little duck was ready and willing.

We slapped a helmet on his head and set off. My mind tangled with a barrage of neurotic thoughts--germs, bacteria, how skinny Beck has gotten-- but just like the duck, we started slow, inching through the lawn and garden section. If there’s anything my son loves more than bikes, it’s lawnmowers.

Our bike tour continued, through the vast array of shovels and hoses, we strolled on to the birdhouses, picking up speed as we zipped along to the home decor. 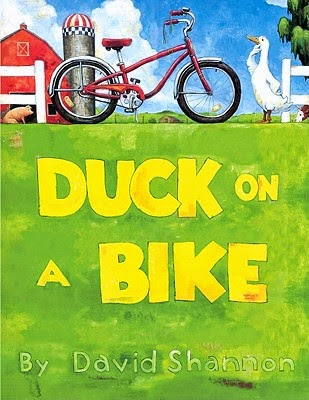 The aisles were empty and wonderful. Only once did we have to veer off course, seeing a woman in sorta-fitting pajamas over near the Easter candy. Then we were off again as I tugged him past the mirrors--because hey, he liked what he saw. Then we whisked by the vacuums, off to the trash cans, we looped around shiny pots and pans before drifting back over to the sporting equipment. All the while he laughed and giggled and shouted the word duck repeatedly. (And you can probably imagine what that sounded like).

After a few more loops around the store I knew it was going to be tough getting our little duck off the bike. But we managed. And as far as trips to Wally World go, it wasn’t too miserable. And he only muttered a few ducks as I lifted him from the bike. 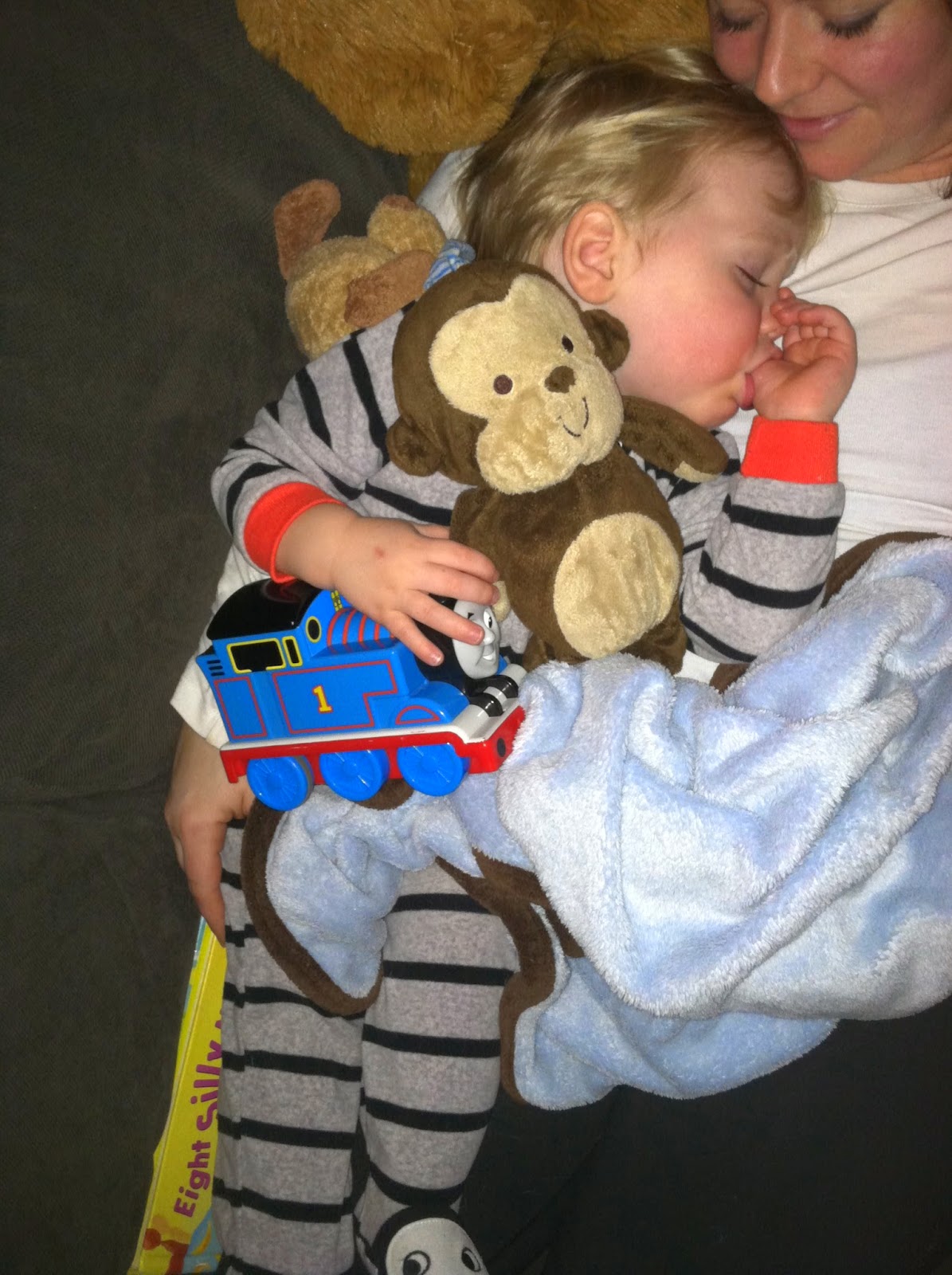 Life with a toddler is all about routine. Nap times, dinner times, bed times, we stick tight to that schedule, and sometimes if feels like our routine stretches the week (and weekends) into one long, continuous cycle.

I'm okay with a routine. As a kid I loved that my house was stable and steady. My teenage years were filled with routine practices. Ugh, my twenties were a routine of mistakes. But now, I get to chase my kid around the house, play with his toys, read him some books and get to bed early. At this stage in my life, I’m perfectly content knowing that I will be up at around six every morning.

And last night I was doing just that. Bath time was all sorts of wacky because, well, you see the silly fish was pulling a train and that was just a riot because—okay wait, I’m off track here. But things were humming along just like any other night. My wife got our son all tucked in and he was out like a lump.

Now because this blog is based in reality I’ll admit that my wife and I were asleep soon after. Long ago was the day I felt shame for whatever time the clock read when I hit the pillow. But then something went bump in the night. At first we only heard, Water. Water, water, water, water!
I hopped out of bed to console my son while my wife headed for the water our son so urgently needed..

His room was awash in this eerie blue tint from the night light on his fish tank. It was like I was wearing night vision goggles when I saw my kid standing up in his crib with a vacant stare.

“You okay, buddy?” I said, just a little creeped out.

I went to pick him up. And that's when the diaper sludge hit the fan.

He flung himself back, taking a blanket with him as he crashed into his crib, flailing and kicking. My eyes hadn’t yet adjusted to the blue so I wasn’t all together sure that it was in fact my son instead of some kind of horrid creature of the night.

He screamed and moaned, and when I heard him call Mommy I was all too eager to step aside.

The screaming continued. And for the next ten minutes I questioned my sanity, my wife’s sanity, my son’s sanity—if any sanity existed in the world. He was inconsolable. But my wife stuck with him, and received a fat lip for her efforts. But she was able to ask him questions about his bad dream. Here’s what we found out:

Eventually she coaxed him back to sleep. By morning my cute, cheery little son had been returned. He didn’t seem recall last night, which I found strange. I think I'd remember morphing into a monster overnight. But nope, he just said, “Sit Daddy.”

And I gladly did. We ate breakfast together, getting back to our normal routine.

We were at a kid's museum when I spotted a book titled, Simplicity Parenting sitting on the shelf. I picked it up and glanced it over while my kid climbed aboard a pirate ship to take the wheel.

I couldn’t stop thinking about the concept. The whole less-is-more approach in a day and age when everything is sold in bulk. I leafed through it for as long as my attention span would allow, nodding in agreement with the simplistic approach. Most kids have too many options. It's okay to be bored rather than rushing from one thing to the next. Boredom inspires creativity.

It made so much sense. 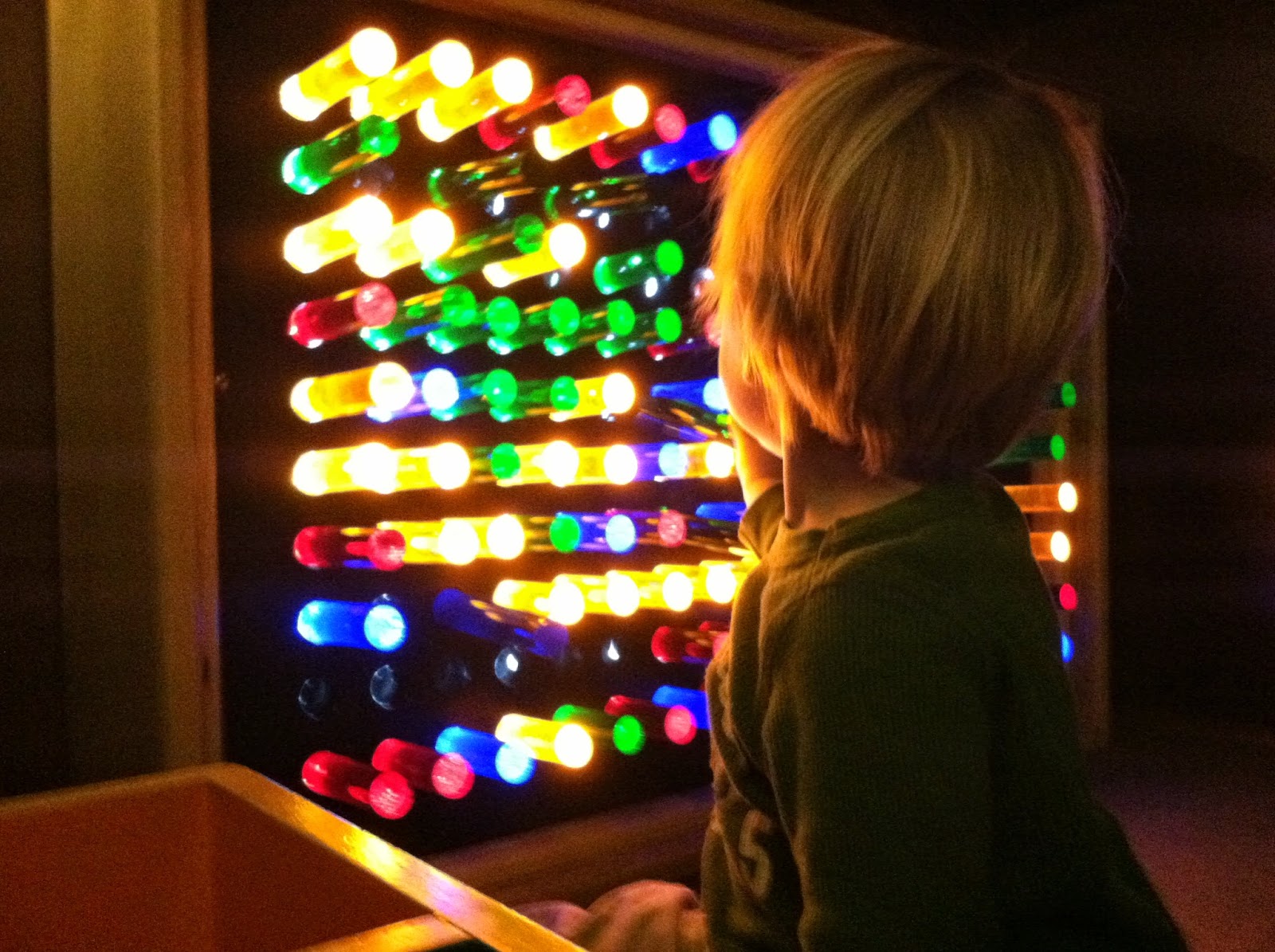 Just a few weeks ago we celebrated my son’s second birthday. It was a Friday night and it turned out to be a pretty low key affair. My wife’s parents were staying with us and her best friend dropped by with her family. No clowns, no blowout party, just a couple of hours of fun. At two, it’s not like he's sweating the goods, he just wants you to chase him down the hallway. So that's pretty much what we did.

And it was great.

My wife and I have been having the whole how much is too much? discussion lately in our house. It's so easy to get caught up. He'll want something and and then we want him to be happy. Grandparents want to buy stuff. But a few days later there are mounds of forgotten toys laying around the house. And all he wants is an emtpy box to play in.

I feel like many of us try to give our kids all the things that we never had growing up. But in reality, that never-having was what inspired us do the fun stuff: Exploring the woods, building forts, watching ants, and when desperate....reading books. I agree with the philosophy that if we constantly give them everything we create a sense of entitlement.

Making our kids feel like the center of the universe is not necessarily a great thing. I mean, remember wishing for that one toy? Hoping and dreaming and counting the seconds until Christmas? How does that work for a kid with everything?

And it ‘s not necessarily about stuff but about time. When I do think back on kidhood, it’s not my toys or shoes or flashy stuff that I had that comes to mind, it’s the moments. I’d rather spend my time just hanging out with my kid.

But even still, from time to time I catch myself not having what I'd call a trophy-winning parenting moment. My son is asking me a question and I just grunt and mumble a lazy uh-huh like a drone.

And it feels awful.


I love how we’ll watch one episode of Thomas the Train and then he’ll talk about it for two days. I love how he reads along with a book because he’s memorized the words. I love how his eyes move around as he tries to work a piece to a puzzle. I love noticing the small, irreplaceable not-for-purchase moments that make parenting so special. And most of it is so simple.

I don’t need his picture to be liked because I love it. I don’t need apps, games, screens, toys, or movies to see him smile. I just need time. And there is plenty of time, it's up to me to use it wisely.