So We Did The Pictures Thing...


Since our kid was born, grandparents and others have been after us about pictures.

Apparently the law states that parents are required to have professional pictures of your family or else be forced to hear about it at every family gathering.

One would have thought from the cluster of photos that my wife and I have posted online would have been sufficient, but nope. Pictures. Fancy real ones, too.

So we did it. On a Friday evening at that. After school and work, we got all dressed up, even as the temps were in the seventies. It was sweaters and flannels for us.

It was a crap shoot to say the least. A two-year-old’s patience is neither predictable nor negotiable. So after full day at school, he was carted home, wiped clean, dressed up, then hauled out to the farm for pictures. This required extra Goldfish crackers to pull off, especially when Daddy made a few wrong turns.

But we arrived more or less on time, and our photographer, Sherri Conrad, led the way.

We started out great, with Simon cheesing for the camera, all smiles and laughter. Then he wanted to "mow the grass" out in the field. A few snaps later and he was really looking for a tractor. Then he was a mess.

Sometimes, on those ultra-rare occasions when my son puts his meltdowns on public display, I try to assure the people watching that he never does this. Nuh-uh, not our little guy. Oh, he never does that either. He never hits or screams at the top of his lungs. But after a few snaps of the camera, as it was going on six o’clock, his usual dinnertime, he was not having it with the pictures.

Sherri, mother of two kids, is a seasoned pro. Still, I wasn’t sure if this was going to work out.

"You just want one you can frame," she said. I smiled at my wife. Oh we could frame it all right. Him hoisted over my shoulder, kicking and screaming and demanding a tractor. A stream of drool cascading down my neck. We could hang it right over the fireplace.

But she worked her magic, and I have to say, the pictures turned out great. 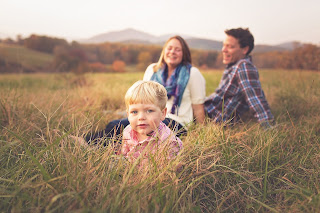 I love my kid just as any parent should. He’s a charming, good looking guy. He's got a great sense of humor, which uh, I mean, how could he not? Yep, he's a good kid, sometimes, even polite. All in all it seems we’ve done s something right with our little gentleman.

But sometimes, behind closed doors. Beyond the world of Facebook and it’s perfect little pictures. The little snot can be kind of, uh…jerk.


I know I know, how awful of me to say. But hang on. Hear me out. He’s going on three, and I’m guessing this isn’t exactly ground breaking behavior. Pottery breaking yes, but I don’t think he’s the first toddler to get his diaper in a bunch because he’s up past his bedtime.

I'm just being honest, because the writing is on the wall. Literally, wiped on in a smear of milk as he takes his sippy cup and uses it like a magic marker.

The guy can be a real jerk sometimes.

Just calling it what it is. Think about it. If I, now forty years old, came over to your house and demanded pretzels and like any good host you offer pretzels but didn’t adhere to my rigid, pretzel prep criteria: letting me stick my grubby little hand in the bag for two fistfuls of broken pretzel pieces.

Unknowingly, you’ve thrown a kink into the Rain Man—like sequence. So I just flop down on the floor, kicking my legs and exalting my displeasure. Maybe take a swipe at your dog.

You probably wouldn’t invite me back over, huh?

But this is how he reacts. Sometimes. The other day he finished his yogurt and hurled the container at the dogs. Jerk Butt. He knows better, and I told him, in my dad voice—that he is not to throw yogurt containers/dishes/sporks/pumpkins from the table.

The next day, he finished his yogurt, wiped his mouth, and then presented the container to me.

And that’s how it goes these days. One step forward, one flop and flail back.

Like this morning, when he woke up and reached out to me for a snuggle. He laid his frizzy head on my chest, his little pajama footie feet dangling. Great stuff right there, even if five minutes later, when Mom came around, he told me, "You go away, Daddy."

Oh, see those blocks all stacked up? Not on my watch.

Nice flowers, they look so pretty, crushed in my fist.

I see it took you fifteen minutes to piece together my train tracks. Derailment only takes seconds

Again, not that my kid is a complete jerk. Just sometimes. But we’re getting there. My wife says that it’s normal. I hope so. Because when he wants to the guy can be a complete charmer. People stop in the grocery store to tell us how well-mannered our child is. I look down, stifle a chuckle.

As any good distance runner would tell you, it’s all about the journey.

Or maybe they wouldn’t. I could’ve just plucked that out of thin air. But on the eve of The Virginia Ten Miler, which passes right by our street, my son was all set to run his own race. 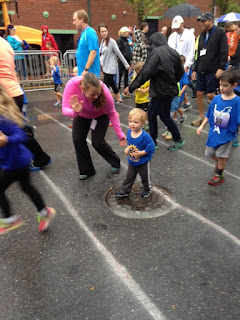 The Amazing Mile is a kids race downtown. And the Amazing Quarter Mile is the grueling test of endurance that kicks it all off. When we signed our kid up a few months back, I knew I had to get serious about training. We built up his stamina, running laps around the house after bathtime under the pretense that it was an innocent game of chase.

But oh no my friend. It was all about the training. We slogged through the sessions, chasing the dogs, training on the hill in the woods behind our house, in the backyard. He took his race seriously, or once again, maybe he didn’t. Maybe he just likes to run because he’s two and all. Something like that.

The rains came hard on the big day. Not that our little runner cared. He had his eye on the prize, or at least on a bag of pretzels, it’s tough to say. He wasn’t going to let a little rain dampen his spirits. , rain or no rain, he was ready to rip and run.

He stomped in a puddle. I took that as yes.

After some group photos—the flash of the bulbs cracking like a storm. (Well, mostly phones and tablets, but you get my drift). I could see my guy was shaken up. This was his first race, so he wasn’t used to all the media types hanging around. I knew I was going to have to get him focused.

He has this little nervous tick where he licks his lips. And he was looking like a lizard out there. The crowd was a bit overwhelming for him. I realized our mistake. We’d been training in the wilderness. Just the two of us and the dogs. I hadn’t prepared him for such a hostile environment. The crowd was getting to him. As a trainer it was my job to get my horse back on track.

We ducked the crowd, heading for the little mounds near the parking lot, on the grass. The familiarity of grass and mud seemed to soothe his jumpy nerves. He laughed and smiled and took the hills.

Then we heard the National Anthem. Go time.

He was running with Mom, a tactic I hadn’t prepped for but we were winging it now. The whole night seemed to be full of surprises. So I went and found a spot to cheer.

The race got underway and I feared he was going to be trampled. Kids pushing and kicking their way to the front. A redhead blasted by at breakneck speed. But I wasn’t worried. The ones that come out flailing usually burn out the quickest. We had a whole quarter mile marathon to run here so let him tire out.

Through the bodies I saw them. My wife and little guy chugging along. He had a look of complete determination on his cute little face, and I knew my training had done him well. I waved to them. He stopped and waved back. Mom and son pushed on, trudging through the elements in a test of endurance.

A quarter mile is a battle of wills. You have to want it, and as I saw my team round the bend and head down the home stretch, I swelled with pride.

They made it. He didn’t win. It didn’t matter. It was fun. He enjoyed himself. I picked up my champion, wet with rain, sweat, tears…that is rain on his butt, right?