Like most households, we read books before bed. But lately the books aren't holding my son's full attention, so we’ve started making up our own stories. It all comes to life in the dark, and with his input, we've come up with some rather epic adventures all on our own. 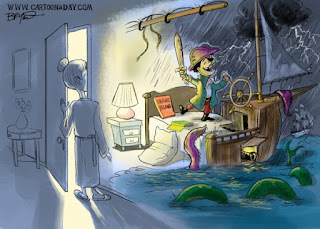 We have Tooter Reuter, Tommy Two-Milks, Sally Simpson and Phillip Fatterwackle. And who can forget, the lovable lush, Johnny Junkfood.

Whatever the names, this is the cast of our ongoing saga. And what could be a better way to expand and explore what's in his little head?

To say he's into it is an understatement. When the lights go out, my son snuggles up, his eyes wide and unblinking, staring at the ceiling. "Tell that one again!" He often pats me on the arm when he likes what he hears, saying, “More. Tell me more.”

He remembers every story we've made up, correcting me if I flub a line. He knows every detail. How Tommy Two-Milks got caught sneaking a milk up his shirt in class. How Tooter Reuter ate nothing but pizza for a month. How they went fishing and hooked a legendary fish called Pearly Purple, who snapped the line and made a narrow escape. Imagination, a good thing, right?

Well, about that. I must have glossed over the rules, the part about these stories being tales, not to be tried in real life. And the tales weren't just bedtime stories anymore. I was telling them at breakfast, while getting dressed, at dinnertime. And somewhere, along the way, I got sloppy.

It started when with the tree climbing. He wanted to go up, way up high. "Like Tooter Reuter, Daddy." Then on the way to school, I fumbled through a hurried tale of how Tooter Reuter and Johnny Junkfood played a gag, putting rocks into Tommy’s book bag. Are you rolling your eyes? My wife is, because that was the day my son put rocks in a classmates boot.

Storytelling gone wrong. Who knew? My wife knew, she explained, but I must have not heard the warnings over the clank of sword fighting and all the laughter. But she was right, it had gone too far. So I explained to our son that these stories are fiction and not to be acted out. That when Tooter climbs the tallest tree to the top, then uses his blanket as a parachute to float back down, it's make believe. I edited all the fun offending chapters. Now, I run each word through a mental filter, taking pains to find some kind of moral to each tale that enters my head.

But I can't help feeling censored. My wife over there coughing when I skirt around her code of standards. I explain how any good story needs conflict. Oh, I found me some conflict.

So finally, amidst the criticism, like any prima donna Hollywood actress, I walked. I relinquished storytelling duty to my wife. Yawn. I’ll summarize.

Sally Simpson is perfect. She uses her manners and the teacher loves her. She gets to do all the fun chores in class because she’s nice and polite. All the boys need to follow suit.

There was probably more but my son and I dozed off. But hey, at least it puts him to sleep...

My son is really into being a boy. He likes spears, daggers, swords, dinosaurs. My wife still likes to paint his toenails and the result is a glam-rock spear hunter traipsing down the hallway.

What else. Well, he loves his bike, pirates, chainsaws and diggers. But he really likes his penis.

Oh yes, he's all too aware of what's down there these days.  He knows that he has it and he’s not afraid to “let it breathe”.

We’ve set some ground rules for this type of "breathing". Explaining that it's only acceptable to drop trou at home, and for the love of God not at the dinner table. Sometimes he finds it funny. Other times he gets frustrated with it. Recently, we switched to boxer briefs and that seems to have helped some.

I’m sure hope it’s normal. I mean, he’s found it. It’s not going anywhere. Welcome to the club, dude.

My wife is a little more uncomfortable with his tugging than I am. He’s only three, so he’s got plenty of time to adapt. My main concern is school. But so far we haven’t had any letting it breathe complaints. So at least he's keeping his business to himself, right?  I’m sure they’d let us know...
Posted by Pete at 9:26 AM No comments: