The other day my son and I were walking out of the house for our afternoon tractor ride. Tractor as in our neighbors at the end of the street have a pedal tractor, which means I get to be the engine when it comes to hills and tough terrain around the woods behind our house. It’s like CrossFit, only with nonstop observations.

Remember when we saw a deer?

Whose rock is that?

So we were still in the driveway, when down the street I heard some arguing. Loud, explicit arguing in front of one of the houses between us and the tractor. A young lady girl was yelling in the street for all to hear, F--- this and F--- that and so on.

I held my son back. “Hang on, bud, let’s wait,” I said, not wanting to walk past the string of profanities littering the street but also not wanting to make a big deal out of the shouting.

This was a week before his third birthday, and it’s getting increasingly more and more difficult to pull one over on this kid. He makes connections. He reads my thoughts. He's sneaky good at making deals. Without a hitch, he motioned to the girl, spewing her classy f-bombs into another car—something about another girl, or shorty as she put it. When he spoke his voice matched the innocence in those eyes of his.

“No," he said, pulling back from me and still eyeing the scene. "I don’t want to."

Now, there were a few different way to go about this. I could have marched right down there and told them to keep it down. We could have ignored them, although that would have been tough, because as my son so diligently pointed out, the girl was not happy. Hell, I could have called the cops I suppose. But it didn’t look like a violent situation. Just loud. So instead, knowing my kid wasn’t about to go inside without a fight—not after being promised a tractor ride—I motioned across the street, to go sit on our across the street neighbor’s riding mower until the smoke cleared.  *Most of our neighbors are great. I guess every street has that one house...

So we started across the street and my kid looks down, then up to me, his hand still in mine.

“She’s not happy,” he repeated, still very much intrigued by the Jerry Springer scene playing out down the street.

I've noticed how certain things stick with him. When they do they are weaved into a story at the most random moments. Like when his Uncle Jeff plucked his own teeth out with my kid's new toy pliers, that memory is sticking around for a while.

We hung out on the riding mower for a bit, making engine noises while the arguing died down. When it cleared out, we started down the street, I couldn’t help feel for the little boy being carried into the house. Because certain things probably stick with him too.

At the end of the street my son climbed up on the tractor and got his feet set on the pedals, the satisfaction beaming on his face. Only a few months ago he couldn’t reach the pedals and now it's ride em cowboy. But first he looked up to me, squinting some in the bright winter sky.

“Dad, you make me happy. And I make Daddy happy too.”

And that will stick with me...

The other morning, through a smear of yogurt, my kid, with his hair still fuzzy and wild from a good night’s sleep, was asking about balloons. More specifically, his You're the Best! balloon from months ago that I tossed in the trash because it lay in a heap under the table like a wet plastic grocery bag.

“Well, your birthday’s coming up, I’m sure you’ll get a balloon then, right?”

His gaze wandered to where our tree had stood, now a barren corner and a stark reminder that Christmas is over.

"We can put them under the tree?"

And there’s the dilemma. Where I’m happy the kid enjoyed Christmas, he’s having a tough time letting it go. My wife said they pulled into the driveway the other evening and he said the house looked sad because we "put Christmas away.” 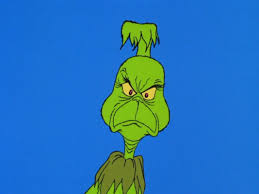 An unpardonable offense in his eyes. He wants to watch The Grinch. He wants presents under the tree. He wants to sing Jingle Bells, or, some form of it anyway… Omaha, it is to ride, in a one horse open….Hey!

We just might have a Christmas theme for his January birthday.

Now, I’m not some jerk who doesn't want his son to enjoy himself. I'm okay with a slight extension to the holiday season. We traveled this year for Christmas, so he wasn’t at home to enjoy the tree and the lights. So fine, we left everything up stayed merry and stretched things out a bit. While other people were pitching trees to the curb, ours glowed in full glory.

I’m no longer one of those rip-it-all-down and be done with it on the 26th type of guys. I don’t let the shopping season or commercials dictate what holiday to celebrate. Truth be told we could all use a little Christmas cheer all year around.

After a while, wouldn't it get...weird, not too mention brown....if we had the tree up all year? And again, I've made some concessions already. I’ve left some lights up, white ones, on the fence post out front, and there's a snowman...

But these two, both of them, wife and kid. They want full tilt Yule tide.

So I'm branded the Grinch.

Fine. But to me, part of what makes Christmas special is the wait. If it was here all year then it would not only get weird, and brown. It would lose some of it’s luster. But try explaining this at my house, while you're reading Little Blue Truck's Christmas and everyone's wondering why the little tree on the last page won't light up. *Hint, it's the batteries, because it's JANUARY...

I’m sure hope this will all pass. I’m guessing with his birthday and all he’ll get back into the groove of things and Jingle Bells will give way to the Easter Bunny. Or maybe by Halloween we’ll have him ready to go trick or treating, singing spooky songs and getting into the spirit of things.

Maybe he can go as Santa Clause.