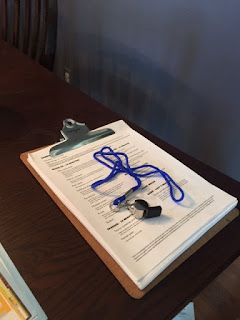 I walk into the gym at 5:29, having changed clothes in my car after a long day at work then the slog of a commute to the local Y. Not for the first time I second guess my decision to coach youth basketball—I’ve been skittish since Meet the Coach pizza night a few weeks ago.

Now, as I walk in, clutching a clipboard of all things, the freshly opened Walmart whistle around my neck, I take inventory of the group.

Fourteen of them. All between the ages of 5-7. Everyone with a basketball, launching it at the goal, balls ricocheting every direction. I realize the clipboard will come in handy for banging against my head.

“Hey guys,” I start. No one looks. I have grand plans for these guys. I have a speech, somewhere, in the recesses of my head, about hard work and discipline. Fundamentals and the results of drills and routines. But that will have to wait, because two kids are licking the floor.

I clear my throat. “Over here, Suns.”

The Suns, our team name. It seems fitting because this whole thing is about to crash and burn. Even my own kid isn’t paying attention. In fact, he may just be the worst of the lot because unlike the others, he knows my true colors. He knows I'm not, ahem, exactly Mr. Disciplinarian.

I reintroduce myself, trying not to stare because some of the kids are almost rabid. One monster is eating Skittles by the handful, a rainbow of color around the lips, a glittering, Apocalypse Now sort of craze in his eyes. Two twins—because of course I’d get twins—are tumbling around the court with cones on their heads. Cones my wife brought for dribbling drills. The only dribbling is the line of spit flowing from Skittle Kid’s mouth.

I line them up. Or, I try to line them up but that would take four men on horseback and a couple of Australian Shepard’s. But eventually I get them to one side of the gym. All have a basketball and no intention of dribbling it. In fact, they look like foot soldiers about to charge a battlefield.

I get out my whistle, give it a little spurt, and they erupt.

They come in waves, screaming, laughing, shouting, tripping and pouting. I’m pulled one way because Will took my ball, then the other because, Is it time to shoot yet? Someone unties my shoe, I’m kicked in the leg then spun around. I yank my arms free from all the little reaching hands because I’ve only just finished the two-hour Appropriate Touching video and there are some clear violations taking place.

I blow the whistle again, then again, desperately, like a traffic cop in Times Square until for the most part they get lined up again, minus the kid licking the wall.

There’s no way. I can’t survive this. Practices. Games. Team pictures. A quick glance at my wife, a second grade teacher, who either cannot or refuses to hide her smirking.

Only they don’t want water. These kids are out for blood.

We regroup. Mia, the only girl on our team makes a layup. I tell her that was great and try to coax her back to the line. “Who’s nex—"

She’s crying. Head down and sobbing. I rush over to her. I’m not used to little girls, but this one is devastated. I look over to her mother, who’s on the phone and making the most of her reprieve.

In a blink Mia breaks free and skips to the front of the line, where she grabs the ball and winks—I swear she winks—then flits to the goal.

A teaching moment for Mia. She's learned the coach is a sucker.

Eventually I corral them. I teach proper form, the bounce pass. A basketball hits my head. We practice dribbling. We take another water break. We huddle up, and I look over the panting faces. This is my team, huddled and squirming, reeking of sugar and feet, looking to me to lead them through the season. And so I set my hand out and they set their little hands out.

The Elf on the Shelf ... Still

We all know how it works. A few weeks before Christmas, a cute little elf shows up at the house. He sits on the shelf, lounges by the windowsill, keeping an eye on things. Then, at night, while everyone sleeps, he flies back to the North Pole, gives a full report to the big guy, then gets back to the house to assume a new position.

We’ve had some elves for the past three years, only not the store-bought kind, some old guys who belonged to my father-in-law when he was a kid.It's fun, stashing them in different places, all the shenanigans and mischief as we build up to the big day. But then, later, after all the presents are opened, the elf heads home.

And that's what happened, until... 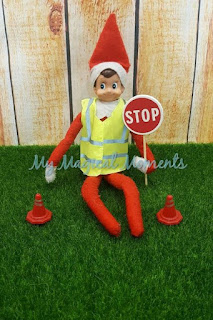 This past Christmas, we were out shopping a few days after the holiday, spending some of that gift card goodness when Simon spotted an Elf on the Shelf near the counter. A um, name brand one, in the box, with the book. It was on sale, half off. So we figured, why not?

Let me tell you why not.

This elf—the one my son named Triskit—was declared a pet elf. Wanna know a fun little secret about pet elves? They never go away. Nope, they stick around all jolly year 'round, just a bouncing through the house night after night. You never know where old Triskit might be hiding, so your kid has to leap out of bed everyday—and I mean e-v-e-r-y-d-a-y, at six thirty or seven, even on a Sunday and hunt him down.

Don't get me wrong, there's nothing cuter than watching him wander through the house in pajamas, donning his punkrock bedhead hair, searching for this elf. What's not cute, is remembering to get out of bed in the middle of the night to hide the little freeloader. Every. Single. Night.

Old Triskit is living it up. He's got his own pajamas, a sleeping bag. I’ve even put in a little shelf in my kid’s closet. Believe me when I tell you Triskit has it good for an elf.

I’m not sure how long it will go on. Valentines Day? St. Patty's Day? Halloween?

In all seriousness, it's not that bad. And I can tell he's not fully buying this elf business, I think he just like’s to pretend. Sometimes he’ll come out of the bathroom, eyes wide, arms out, and say, “Dad, look where Triskit is hiding.”

And I do. I want to know. Because even as I joke, it’s fine with me. One day my kid will grow out of all this stuff. Or maybe he won’t and things will be downright weird.