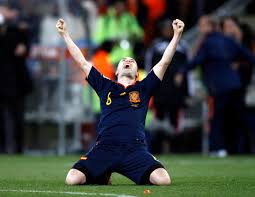 For three years now Simon has been playing soccer. It’s not on the top of his list, but it gets him out and he likes playing the games. Last year we discovered he was kind of a natural goalie, the kid who’s not afraid to get down and dirty and stop the ball with his face.

At times he was sort of lost out there on the field (I know I was), but at six he’s able to turn the ball around and kick it in the right direction. But still, I never really thought he’d be score, I always hoped maybe the ball would ricochet off his foot and go in.

I know, scoring and winning and all that doesn’t matter so much, having fun, right?

Let me set the table here. He’d already been in the game and come out. He’d watched from the sidelines, hair sweaty, eyes sharp, totally focused. He lay on his stomach and took in the action while his teammates laughed and joked and pretended to be babies. They stuffed grass down each other's shirts and otherwise behaved like a bunch of six-year-olds. Usually, this was my kid. Never one to miss a joke, most game days he could be found in the middle of the horseplay. Last year he liked to pick dandelions and wander off in search of flowers. But not on Saturday. On Saturday, Simon was homed in.

When his coach turned and told him he was going in, he was up and ready. Back in action, he began with the normal routine, dancing around the herd of kids, testing the waters with his toes but not fully getting involved. The coach had gotten on him about not crowding his teammates, and so I watched in awe as he took the coaches advice and broke down the field (pitch? I’m not up on my soccer terms), And he was still breaking towards the goal when the ball hit him in the waist and sort of rolled down his leg.

Wait. I stood up as he made the adjustment, getting his foot under the ball just as the defenders closed in. He kicked. I leaned forward. The little soccer ball shot towards the goal. The goalie reacted late, just as the ball rolled through the goal.

Whoa. He just scored a goal.

His face, though, just after he watched it go in. Awe, disbelief, a flush of excitement found his cheeks and then he looked over to me.

And who cares if it hadn’t happened. These kids are five and six years old. That said, he’d been going to these games, practices, watching all his teammates score. So to see it happen for him was pretty damn remarkable.