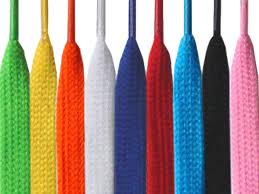 Somewhere along the way, my four-year-old son developed a shoe fetish.

It started with laces. See, all the older kids down the street have shoes with laces, so well, Simon wanted laces. Never mind that he can’t tie them up (he has me for that), or that they’re a size too big and every time he starts to run I picture him smacking his face on the street, all the cool kids are doing it so he needed to get on board.

We have a pair of hand-me-downs “lace shoes” from his cousin, and well, my kid made a compelling argument as to why he should have them. So for a week he’s worn these boats around the house, stopping every six to eight steps so that I can alternately tie his shoes.

Then he wanted his old shoes, back, the sandal types from last summer. So he crammed his foot into those. After that he wore his water shoes to school. Then his Ninja Turtle shoes because they light up. My kid's like the Kanye of shoes, scoping out anyone who walks by, checking out their gear, seeing what kind of kicks they’re rocking. This from a kid who demanded to be barefoot his first three years.

But it’s not about the shoes. It’s that he wants to grow up. And it’s killing me.

He watches these older kids, cruising up the street, on their bikes, right outside of the house. Then he runs in and puts his little bumblebee helmet on and races off on his training wheels to catch them. I chase after him, wishing the kids would stop and talk to him. But he’s unperturbed. He’s determined. They ignore him and he just pedals harder.

You’ve got to admire that kind of persistence.

We’ve hit that stage where you never quite know what our kid is going to say or how he's going to say it. One minute he's talking about the pros and cons of purchasing a Blu Ray player and the next minute he's boggled at how in the wold a bunny can hide Easter eggs.

Funnier still is watching his adult-like gestures while having the most kid conversations.

Speaking of conversations, yesterday, we were riding our bikes in the basement—I’m clocking some miles these days, one circle at a time in our unfinished 1,500-square foot basement—when he motioned for me to pull over.

I did as I was told and he waved me closer. “Come here, Daddy. Let’s have a conversation about our bikes.”

He sat back, not unlike a traffic cop, looking over my bike. “You’re bike has two wheels, mine has four,” he said, looking down to his training wheels. “That means my bike is faster.”

Or the other night when he bonked his head on his bed frame and popped right up, as though he knew we were worried about him.  “I’m okay,” he announced. “I have a special head.”

He does have a special head. He does keep me cracking up. And not only is he funny as heck, he’s strong willed, which is a nice way of calling him stubborn as a mule.

Last weekend we joined some friends for the Healthy Kids Running Series, which is basically a footrace for kids. Both my wife and I figured he’d be better suited for this kind of thing next year, but once he heard “race” he was all over it.

Our kid is still a napper. It’s phasing out, but without an hour or so of shuteye to knock the edge off, you'll find yourself dealing with Damien from The Omen. We didn’t. At 2:30, thumb in mouth, we headed over to the park.

The yawns were deep, engulfing things by the time we eased into the parking lot and made our way to the registration. We were early, and they were still lining the field with cones. By then, little Usain Bolt’s eye lids were getting heavier by the breath. Sure enough, by race time, he looked like this: 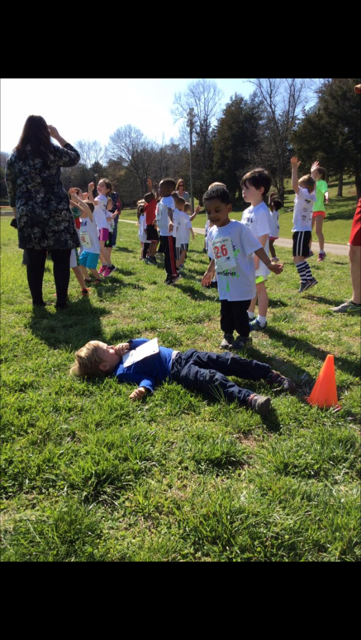 My mother-in-law thought he might see the other kids lining up and follow. But again, back to that mule thing. But he rallied, and just barely. My wife got him up to the starting line, looking a little Weekend At Bernie's-ish and swaying some by that point. And I almost pulled the plug.

I felt like I was pushing him. When hell, if he wanted to plop back down and have another look at the sky, that was just fine by me. But he didn't. The whistle sounded and off they went. All but one.

At some point he got the memo. And I've never felt so bad and been so proud as he finally got it in gear and finished dead last, but first in my heart. He finished. And I couldn’t have cared less where he placed. And we left, and went home and he picked up his sword and fought some trees. It was great.

Maybe it’s because I was never involved in sports until I was nine or ten and it was my idea, but I don’t feel the need to make him do organized activities. He’s four after all, which to me means he should be doing this: 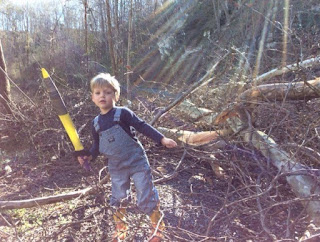 Healthy Kids is great. And I think he'll enjoy it more in a few years, but if he doesn't, that’s great too. Every one is different. And enjoys different things.

My kid has a special head after all. He enjoys having “conversations”
Posted by Pete at 2:42 PM No comments: