A Good Day for a Birthday...

Today isn't my first day trapped in a womb, but I've come to realize that I'm dying to get out. 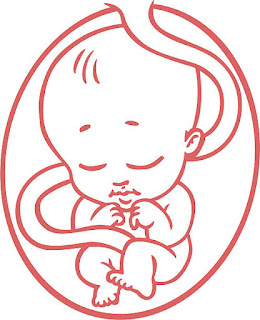 Sure, it's warm and cozy, and yes, I'm getting fed on the regular. I’ve floated through the first two trimesters blissfully forming limbs and thoughts, blubbering along as my fingers materialized right before my eyes. Or maybe the eyes came first. Honestly, it's been madness. How am I to know?

I just want out.

Let me explain. There are two types of babies in this world: those who choose their birthdays and those whose birthdays choose them. And while it's been a nice ride, minus the jalapenos and the fatigue and morning sickness (my sincerest apologies), I am more than ready to do my own heavy lifting, thank you very much.

Two hundred and seventy-five days, give or take. Enough is enough. I know from previous adventures that there's nothing north but that buttery voice that rocks my world and rocks me to sleep, so I kick a flip and head south.

Yeah, I feel bad, okay? Especially when she says “oof,” and things go sideways as we tumble over. Trust me, I have no intentions of hurting her, and it sets me back a bit with all the moaning. But she's spent so much time bemoaning how I've wrecked her body that I figured, what does it matter in the end.

Wait. Another voice nearby. A familiar, oaf-like bellow that belongs to an utterly useless lifeform. Honey. Aside from constantly asking if everything is okay, Honey makes no major contributions to my well being. In my abundant spare time, I’ve made a mental image of Honey, with big droopy ears and panicked, wide eyes and thumbs where one should have ears. Honestly, I’d be thoroughly amazed if Honey can tie his own umbilical cord, and I have some serious doubts about Honey's emotional readiness for my homecoming.

Okay, things are happening. I get myself righted and plunge ahead. I’ll spare the details, because I’m not sure you honestly want to know what I have to go through here. Let’s just say that making a human—a particularly gorgeous one at that—is a lot like making a pie. There’s going to be a big mess left in the kitchen afterwards.

I know I'm getting my point across because it is complete chaos out there. Yelling and tripping and hysterics because that big dumb Honey is being a bonehead. At this point I'm thinking how if Honey isn't going to help out he can at least get out of the way. He's quite terrified, and I cannot properly convey just how thankful I am that I haven't been stuck with him for all these months.

Okay, now or never. I hunker down and get to work. Screams. Shrieks and sheer terror as it's all systems go here. Again, my apologies. My gracious host has been nothing but accompanying and maybe one day we can look back on this with nostalgia instead of nausea. But as of now? This is happening. How long did she plan on hauling me around, anyway? It's checkout time.

Just a we're getting somewhere, new voices emerge. A big commotion. The clatter of utensils. This cord is...ugh...it's holding me back, because I can see! I can see daylight. I push onward, a bit surprised that it's s now a two way street. My host is pushing too, hard, and I'm somewhat offended. I'll have to remember to voice my concerns later.

Oh goodness it's freezing! Go back! Go back! Retreat! What was I thinking? Now they're yanking at me, tugging on my soft, mushy head and jostling me silly. All I can make out are shadows and figures, more painful lights and then I realize one of the round orbs belongs to that deep voiced oaf.

They've handed me to Honey!

No. I shriek. Oh boy do I shriek. And with all this room, I just go wild. Because my fate has been sealed. I've left the safety of my burrow only to be end up in these cold, cold, oafish hands. What is he doing, anyway?

Wait a minute. Oh, that’s nice. I know that voice. That lovely voice. I tilt my face up, blinking and sniffling as I make out a new blur. A sweet, angelic, very exhausted blur. Honey touches me again with his ice hands and I let him have it. But then I'm against her chest. Mom. Sweet mom is here.

And I am warm.

The other day we were playing outside when the sky went dark and the rain came pounding. It was a downpour, the kind that’s typical in Virginia after a day of high temps and humidity. Simon and I watched as gushing rapids washed down the curb, carrying leaves and sticks and whatever stood in its way. Suddenly, I had an idea. 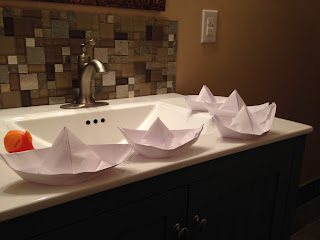 I wanted to make a boat.

No, I didn’t want to go build an ark in the backyard. I wanted to take a sheet of paper and fold it into a boat and watch it float down the street. He was all about it. There was just one problem.

I didn’t know how to make a paper boat.

I knew how to make a paper airplane, but boats? Nope. I tried different folds, racing the clock as the sun threatened to return and the rainwater went from gush to trickle. I folded and creased, but all I came up with were wads of nothing. One after another, I hurried through one crumple to the next, using—ahem—an old manuscript I’d been saving to light our next fire pit.

Nothing. I had nothing. We tried some lopsided catastrophe that turned out to be a much better submarine than boat. Paper submarines. I was great at those.

The rain let up. Our floodwaters receded. My son lost interest.

Never again. I vowed to be prepared. The next day, on my lunch break. I Youtubed like a mother. I worked out the kinks (folds) and became a master boat builder. Okay, maybe a decent boat builder. Either way, people stopped by my desk to find a man making paper boats like a boss.

This may seem like the work of an idle man with plenty of time on his hands. But no, I want my kid to know certain things, Boy Scout stuff. Everything in The Dangerous Book For Boys. Both simple and complicated. Making a paper boat was one of those things.


So now we just need some rain, but in the meantime, we have a bathtub, so… 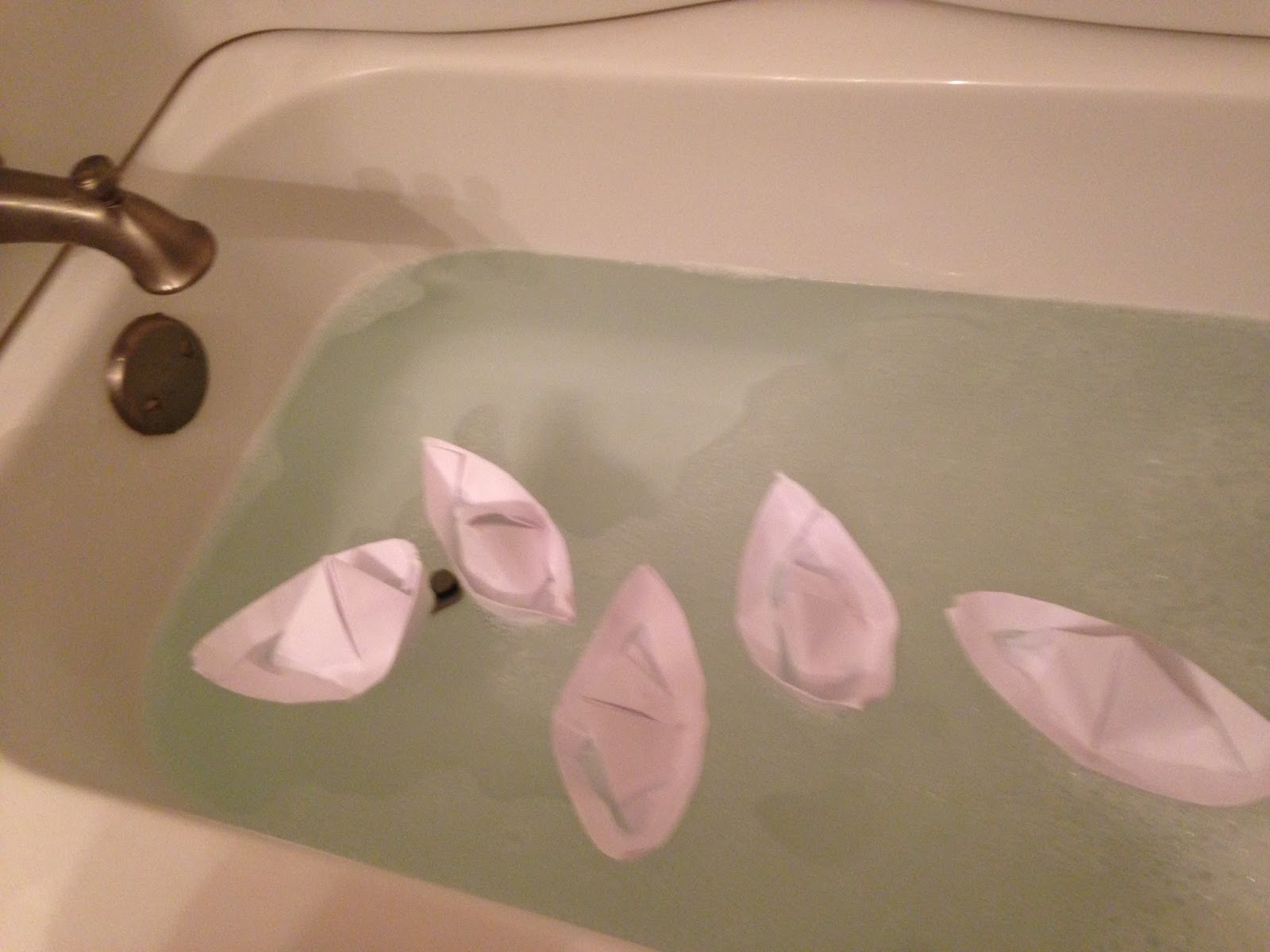