Most of us have that one neighbor. This is about ours, and my quest for peace in the neighborhood...


When my wife and I bought a foreclosed home in 2010, we were welcomed to the neighborhood as saviors. Sort of. But our little ranch house had gone unmaintained — lost in a weed-riddled lot that bordered a luscious green and impeccably trimmed lawn. So we rolled up our sleeves and got to work. 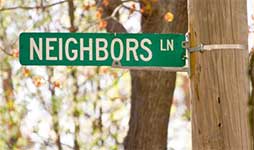 We got to know most of our neighbors. Then we met the owner of that precisely manicured lawn — our immediate, next-door neighbor, whom I’ll call "Gloria."

Gloria, it turns out, is the neighborhood historian. I would guess her age to be about 70. In her raspy voice, raked over by Virginia Slims, Gloria is fond of starting conversations with an accusatory tone. With her lauded Pekingese, she is easy to spot. Her turbulent sashaying is a sight to behold. (We worry for her hips.) Her wild hair flames up like a peacock when she is ruffled — which is often.

Maybe it’s the Southerner in me, but at some point I made it my mission to get on her good side. Almost five years in, however, Gloria has proved to be a formidable challenge.

She watches me like a hawk, as if I’m prone to stealing her house flag and mounting it on my porch. In the unlikely event of a compliment, I get one served with a dash of spite.

Gloria once said she doesn’t care for gossip. Then she took a generous puff on a cigarette and whispered that the old owners of our house were on drugs. In time, we learned from her that most of the neighbors are on drugs. Gloria does not tolerate drugs.

She fancies herself a Southern spinster and is the only person I’ve ever heard use the phrase "I do declare" when not onstage. She speaks to me one day, scowls and mutters in disgust the next.

I nod and smile and grit my teeth.

Not long after we moved in, I got my first full dose of her ire when I pulled into the driveway and found her glaring. Fearing that we’d finally hit her loathsome "drug list," I proceeded with caution, asking whether something was wrong.

Her eyes flashed as she aimed a curled finger at me, raising her voice to match the trill of a chain saw: I was nothing more than a lazy sack, good for nothing — and, oh, by the way, I had stepped on her property. That was the first time she mentioned her shotgun.

I needed months to recover, to get back in her good graces. But I managed. Over time, I have learned not to take her slights personally. The neighbors across the street received the freeze for a full year because Gloria thought they’d copied the color of her shingles. She called the police because someone had allegedly dug up the tulips in her backyard. The list goes on.

I trudge ahead with my quest.

Throughout the winter, I shoveled her driveway — only to be told to stay off her yard because of insurance reasons. I thanked her for her concern. Summer came, and I mowed her side of the yard. She pointed out that I’d missed a spot. My wife could only shake her head.

Most recently, she called animal-control officers on our dogs — the same dogs she’d fed Milk-Bones and sweet-talked the previous evening.

And so it goes.

Sometimes, the kindness is slow-going. I’m not Gandhi. Lately, I’ve taken to humming Sympathy for the Devil when I wave to her. Some days, she waves back; other days, she laments my existence.

But the house is coming along.

Home Is Where the Boss Is

So my kid is into giving orders. Dictation. Demands. He’s got it down pat, complete with the tone and cadence of a well-seasoned mob boss.

Now, being that he is the kid and I am the adult parent, this doesn’t always go over so well. But at the same time I’m trying not to raise my voice at him. You know, tell him not to be so mean and angry by being mean and angry. But that leads to another problem.

My three-year-old is not all that rational. Like me. I’m as rational as they come. So at least he has a role model to follow.

His gripes are the common ones. The Food. Bedtime. Baths. Ugh. While he used to love the tub and his toys, lately he’s been protesting baths like a college student with a cause. We haven’t been forcing him to bathe every night as we once did, as a skip night won’t hurt him. But the other day he was covered in ketchup. Sand. Mud. Some grease from the car. Magic Marker.

Seriously. It was time to get clean. Come hell or, uh, bathwater he was getting in that tub. Suddenly it seemed all of those skip nights had turned against us. The kid is a shrewd bargainer, able to dial up and recall anything we've said along the way throw it in our faces with the moxie of a good defense attorney. And if facts don't sway the jury he turns on the charm, tugging at the heartstrings with sad eyes, asking to snuggle and read books.

But sometimes, after a few too many skip nights, there's no avoiding a good scrub down. So after an epic flip out, we got him in the tub.  A half hour later he was still in the tub, now demanding to stay in, flipping out all over again because he thought his Band-Aid was going to come off. These are the moments you just let him go. Don't talk, don't reason. Let him go. My wife just gave me a kiss. Eventually it passed.

His teachers at school tell me that he’s a great kid. He follows the rules. He shares. He uses his manners and is an all around delight to be around. Then he gets home and sheds the halo. With a grunt he spits, grows horns, then grabs his pitchfork and goes to work.

At home he is a hairline trigger away from a meltdown. I’m not sure what it is, maybe all of that delightfulness day in and day out at school just wears one down. I know part of this is his age. He’s three, and he needs to test boundaries, explore his options. Push the limits. Find his inner tyrant.

Let’s say I don’t open the yogurt just right. And by just right I mean peeling it just short of coming off, but not off. DEAR GOD DO NOT TEAR THE LID COME COMPLETELY OFF! Doing so will initiate a stage four meltdown that may result in a fork toss and timeout. Same goes for putting on the shoes too tight.

Timeouts. Yeah, what a joke. Last week we stuck him in his room after one of those stage fours and things got quiet. My wife and I actually had a conversation. A whole one. It was weird.

So after maybe five or seven minutes, max, we went to talk to Chuck Chillout and see if he was ready to rejoin the human race. What we found instead was a potpourri of colorful fish food all over his floor. On his bear. On the pillows slung across the room. I had to laugh. Because he looked surprised. His mouth-opened and his eyes wide, I could tell he was thinking “Holy S#*! I did not know that would happen!"

I often find myself laughing. Because it’s ridiculous, this kid’s struggles. And the above examples are only the few and in between moments. Maybe I should write more about all of the spectacular little moments that make up our lives. How he surprises me every single day with a clever observation or word. How shakes or nods his head when he speaks to emphasize a point. How I love him so much that I could burst.

The truth is I’m blessed to have a healthy son and wouldn’t change him for the world. I can handle the yogurt. The tears. The socks and shoes and the meltdowns. Because if my house was quiet or clean, so help me God I would be lost.