On Sunday we ventured out to a park for some fresh air and family time. The weather was mild and it was the perfect opportunity to get out and enjoy the sunshine. And we weren't the only ones. Pulling in, it was a little crowded for my taste and I suggested maybe trying another place. It’s not that I don’t like people, more that I don’t like lots of them all at once because I'm mental. 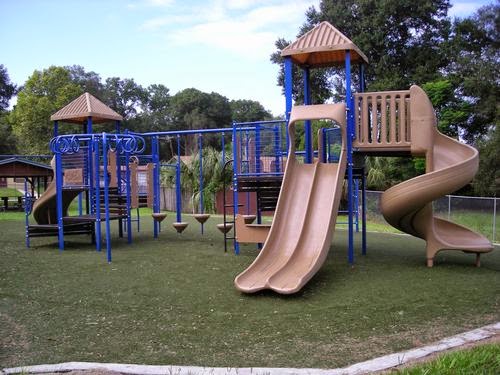 But my wife gave me that look. The look that says get over it, you’re being a curmudgeon, live a little. It’s one heck of a look. So with that I parked the car and out we went, hand in hand in hand and enjoying the sunshine.

We headed for the slides first, I wanted my wife to see how Simon could go down all himself. But my steps froze at the sound of this god-awful scream. A guttural, primal yelp that had me looking around for a feral cat by the dumpsters.

But that wasn’t it.

It was a girl, maybe six and she was perched over our heads on the slide like a gargoyle. Once she had our attention she was off, slipping down and then peeking back, letting go with another um, sound. Okay, I thought, she’s an odd one. I glanced around for a parent or adult or perhaps a mother bobcat missing a human.

I tried to ignore the girl, I really really tried to ignore her. But she kept up the routine, with the grunting and growling so hard that her face turned a deep shade of maroon. And if that wasn't enough, she fell right in behind us, barking and bellowing or whatever the whole way along. At one point my son, not yet two, looked up to her and said, “too loud.”

I had to agree, and by then I was a wreck of nerves. This little demon girl wouldn't leave us alone. As it turned out, the growling thing was a some kind of game she was playing with her older brother, who we found lurking in the shadows.

So then there were two little beasts.

Let me take a moment to say that while I think it’s great that two kids can be imaginative and pretend to be dragons instead of sitting around watching television or ipads, I'd prefer that they be creative somewhere else. But that wasn't happening because kids just naturally gravitate to my wife. Being a teacher, she's great with them and knows the proper way to speak to them and diffuse situations. Me? I tend to take more of a Billy Madison approach.

It's not so much that I'm immature, it's just that--whatever--I only wanted to spend some time outside with my kid without being roared at every few seconds. I don't think that's too much to ask. And besides, the last thing I needed was for my two year old to pick up on some very unnerving demon dragon growl that made me want to drop these two kids off at the nearest church.

My wife told me to calm down—to be an adult. After a self-imposed timeout I realized that she was right, I was getting way too worked up about the whole thing. We couldn't control every environment our kid entered. So while these two dragon kids hovered over us, being sketchy and making these horrible sounds, I would force myself to grit and bear it. I reentered the playground calmly, determined to get along and play nice.

Another roar from the dragons. Oh look at the time, we really gotta get going. A few more passes down the slide and we were out of there.

Did I handle the situation appropriately? Maybe not. Okay, probably not. But the situation was new territory for me. I can't help the urge to protect. And you know what? My son is only two, so yes, I can control his environment. For now at least.

On the way home from the park, my wife (who sees different kids all day long), saw things differently. And what she said made me think. (Don't you just hate that?). Where I saw a little girl being weird and nerve wracking, she saw a bright, imaginative kid craving adult attention. Where I was annoyed and only thought of my own discomfort, she engaged the little dragon girl, urging her on. In fact, by the time we left the park she was chatting up a storm and showing us the other side of the playground like a little tour guide.

I sighed, wishing I’d done things differently. Those are the little moments where I need to be the adult. Those kids were acting out for attention and would it really ruin my day just to loosen up and go along for a while?  And it won't be long before my kid wants to be a dragon or a tiger, or maybe a mime. Probably not a mime. But that's not the point. the point is that it's not just about my own kid, but every kid. We're all in this together. And we have to share this playground, even with the dragons..

But still, if I hear one of them say"O'Doyal rules!" well then, all bets are off...

A Taste For Math

Not yet two years old, my son is a math whiz. Go ahead, try and stump him with some addition problems. Ask him what one plus one equals, or two plus two. Don’t be shy, bring the heat, try to stump him with something crazy, like a word problem. 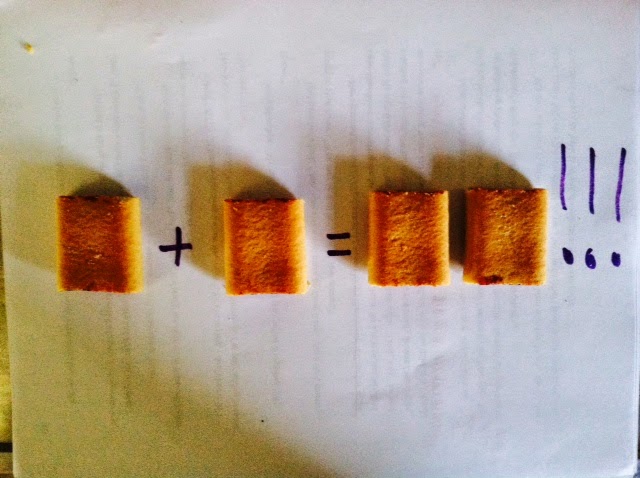 For example, what is one New New plus one New New? Prepare to be amazed, because without a thought he will joyously shout, “Two New News!”

You may be wondering just what in the heck is a New New. It is what my son calls a Fig Newton--the current love of his little life at the moment. He wakes up calling for two New News in the middle of the night. He yearns for them at nap time. Or he may just randomly demand them when the urge strikes. I mean the kid really, really really likes Fig Newtons.

That being said, his standard answer to any and everything—Pie, e=, long division, square roots, world peace—is a couple of Fig Newtons. But it’s a great trick at parties. And by parties I mean visiting with grandparents. I guess it is an educational opportunity.

My wife the teacher, is so adept at using nearly anything as a learning opportunity. But the credit here goes to yours truly. My over feeding our child has lead to a great introduction to math. He really does know how many fingers make two. The problem here is that it won't be long before he realizes that what's better than two New News, is of course, three New News...

*The square root of 81 New News were consumed during the writing of this post
Posted by Pete at 3:49 PM No comments:

Between the books and toys and the sing-along songs, it’s really easy to get stuck in kid world. Where trains can talk and the sun is singing. The day is filled with counting and colors and singing and of course....snuggles. Sometimes it's like living with Buddy the Elf, and after a weekend, my brain is usually cluttered with whatever happy little song is in rotation at the moment. So when I get to work and start humming, I don't exactly reek of testosterone.

But on New Year’s Day it was time to change all of that. It was time to get out and reconnect with my inner mountain man. I'd been cooped up for too long. I'd gotten soft. 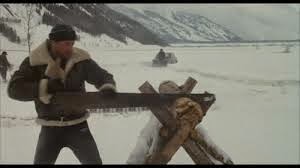 So with the family safely tucked away at the ranch, napping or playing or otherwise just making fun of me, I set out to hunt and gather.

More gather I suppose. We’ve lived in our house for four years but only recently got around to having the fireplace inspected. Now we were fresh out of firewood. No problem.I gassed up my chainsaw, located my phone (I’m a little accident prone) and stepped out into the elements where I was all alone, foraging through the woods...behind my house.

I felt the survival instincts kicking in, I needed to keep my family warm. I mean yeah, we have heat and it was sunny and fifty outside, but I wasn't about to let that get in my way. There were no talking animals out here...only that bird....singing such a lovely song--dammit, I'm a man. A rugged beast of a man. Like Rocky when he went to train in Russia. Pretty much the same.
Getting down and dirty, I figured out the choke on that chainsaw and cut six or seven cords(?) of wood from a felled tree. But my wheelbarrow tire was flat so I had to haul them up the hill to the yard. No problem, I was like a caveman. A caveman who desperately needed chap stick. I lugged that wood to the backyard, yanked up my argyle socks, and then found my ax. But just as I went to take a swing I had to stop, as it finally dawned on me just exactly what song was stuck in my head...