Hey guys, I'm not big on self promotion, but I wrote a book and launched a Kindle Scout campaign. Please check it out if you have time, and if you like what you read, please nominate!


This is a story I started writing over a year ago. I quit several times, thinking, what am I doing? I can't write about that? From a teenage girl's perspective. But I kept hearing her voice in my head, so I kept on writing. This is the result.

After her mother’s death, sixteen-year-old Chloe Vanderbrooke is picking up the pieces and moving in with her Uncle Robbie and his wife, Glenda. Left cynical and self-destructive, she fully expects life to suck, but she’s hardly prepared for it to unravel completely.


It begins when Glenda’s younger brother, Andrew, arrives. With his laid-back smile and easy going charm, Andrew seems much younger than twenty-eight. He’s fun, flirty, and Chloe is thrilled to talk to someone who offers more to the conversation than the dreaded, “Are you okay?” But when he kisses her, it’s all wrong.

After the kiss, Andrew isn't so charming, but sketchy. He lurks around the house, stalks her at school, but it isn’t until Chloe finally confronts him that she finds out just what kind of monster he is. Her aunt and uncle are too absorbed with their own crumbling marriage to notice that Chloe’s skipping school, avoiding dinner, and even contemplating suicide.

Chloe knows she should tell someone about the rape. But that person is gone. Not only that, she’s ashamed of the kiss, tormented by victimhood, and struggling to keep her counselor, teachers, and her friends in the dark. What she really wants is revenge. Fueled by a rage that’s been simmering since her mother’s death, Chloe discovers that Andrew is not the only one capable of violence.

I’ve got this weird wallet in my back pocket. It’s bulky, synthetic leather, the kind of thing you'd give to a kid along with expired cards and old driver’s licenses because he keeps going through your wallet. 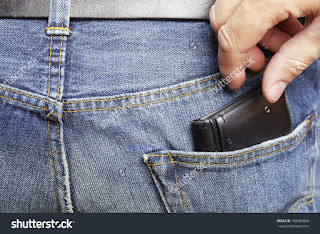 Somehow, over a snowed-in weekend of playing in the yard and playing in the house, my son managed to convince me to trade my wallet for the aforementioned pleather wallet he got for Christmas.

My old wallet, six or seven, maybe even ten years old, was in fact, due to be replaced. But I never saw this coming--getting duped by a kid still two weeks shy of his fourth birthday. I found him standing on a chair at my dresser, rifling through my credit cards. (This is becoming more and more common as of late, these little nest of treasures popping up around the house. A spoon maybe, with some paperclips, my social security card, a shoe lace). Fearing that he’d clean me out, that I'd go to pay bills and find myself with nothing but hotel key and a swiped-out Panera Bread card, I asked if he wanted to swap wallets.

Nothing permanent, just you know, what else was there to do? It was ten degrees outside, and maybe my mind was still jarred from all the cold. But when my son’s eyes went wide. He started up with that flashdance hopping, Yes, yes, yes!. Now well, here I am, typing out this post while sitting lopsided, a big fat wad of awkward in my back pocket.

The kid is good. And I know where he gets it. I'm told his mom once nearly convinced an uncle to give her his pet cat. And not just that, the kid is immune to the usual trade back tricks. I tried everything, pretending I got the better end of the deal, looking over the new wallet, “Man, this sure is a cool wallet. Nice and shiny and brand new. I’m sure glad I got rid of that worn out, ratty old thing.”

He only stared down at my wallet in his hands, nothing but pleasure in his eyes.