That’s what I did. Me and my son, we took off to a field up the street from our house. And while this might sound like nothing special, certainly nothing to write a blog about. It was. It was remarkable.

No really, it was. 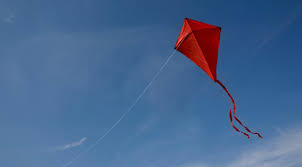 For one, he was in a great mood, patient, and ready to listen. And just as importantly, so was I. I made a point to talk to him and explain what we were doing. And when a soft breeze picked up to a gust and sent that fighter jet kite up in the sky, it was perfect.

I wasn’t expecting it to work out so well. As a parent, many—maybe most—ideas are picture perfect in our heads but not in execution. So very many times I’ve had the biggest, best idea, picturing it in that grainy footage that is my own childhood memories, only to have it crash and burn.

It never had a chance in the first place, because it was competing with nostalgia.

But this kite. That sucker just hung up in the sky, like something out of a pharmaceutical commercial. I handed the spool of string to my kid, slow and cautious at first, then realizing he had things under control I actually sat back, hands off and lying on the grass while he did the flying. I couldn’t have smiled harder. Really. It reminded me of this day...

Again, I know this day wasn't historic. But it was. Even when after a while he got bored with it and took off his rubber boots and went running down the field. I wound up the string and chased after him. We played games involving a soccer net, no ball, and two chairs. And it was perfect. I would post pictures, but you know what, I didn’t have my phone.

Like I said, it was perfect.
Posted by Pete at 3:11 PM No comments: