The Grooves of Time 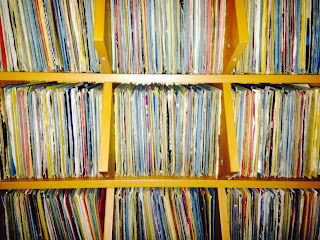 A few years ago, my dad gave me something more valuable than money--his record collection. Not just any collection, my dad was radio DJ for more than half his life, and over that time he amassed a library of wide-ranging titles that span from classic to quirky to I-can’t-believe-that-was-even-made.

Moving the collection took time. Crate by crate, box by box, we carted the music from his basement to mine, just as we’d carted those records along with speakers, turntables, mixer, wires and that lead heavy Peavey amp into church halls, bars, lake houses, gymnasiums, and everywhere in between so many years ago.

I've got some CD’s, tapes and even a couple eight tracks. I've even got a few of my father's old air checks from the station that are a blast. But the records, that's what I remember most. And it's even more fun now, watching my son listen and learn.

It’s something to see, a five-year-old gently setting the needle on the record. He’s got decent taste, too, although the Star Wars arrangement gets most of the play as we dual it out with light sabers. But he digs Michael Jackson and he loves Inner Circle's Bad Boys theme. And Joan Jett, too. It cracks me up whenever I hear him singing I love Rock and Roll…

The of the album cover has a chunk taken out, right at Joan Jett’s elbow. We had this dog, a German shepherd named Samantha. She was a handful, a pure bred runt that I hand picked from the litter. She ate everything, with a particular penchant for wax. One day we caught her chewing on that record, and well, it’s how it still is today.

Pure nostalgia, those records. It’s where I remember and pass along new memories to my kid. It’s where we don’t watch TV. We don’t play on the computer. It’s analog time. No screens and no modem. It’s where we’ve built a clubhouse under the steps, and where we dance like fools because it's what we do.

The 45’s (those smaller, one song records for those younger readers) are a goldmine. Anything from the twentieth century lurks in those rows of analog treasures lining the makeshift shelves. From Newcleous’ Jam on It, to The Fat Boys w/ the Beach Boys (yep, look it up), to Sinatra to U2, Simply Red, Blue Oyster Colt  and so on, the most random playlist take shape down there. I remember playing We Are the World followed by Heavy D and the Boyz followed by some Boz Skaggs. It’s pure chaos. You really never know. 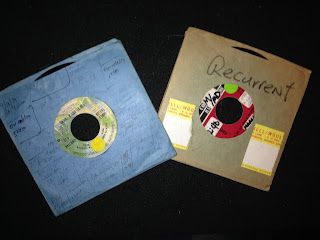 And the sleeves, with dedications and quickly scrawled requests. Scribbles about times and dates. You can’t find that on Amazon.  Those records have seen more Proms than an old gym coach. Wedding ceremonies, dance clubs, it’s all there, and even a scribbled out time slots of when to play the records at the station. Stickers to show what sides, notes and trial and error scribbles of advice. FADES AT 3:14, or DON’T PLAY BEFORE 4PM! Yep, apparently to DJ’s everywhere, Kool and the Gang’s, Let’s Groove Tonight, was meant to be taken literally. I can also tell you thatPaul Simon’s, Me and Julio Down by the Schoolyard was getting some serious play in 1979.

There’s something about the classics. I mean, what is it about The Beatles that even today you can play The White Album and a kid’s head pops up like, That’s somebody. Who is that, Daddy? We rock out to Jimi Hendrix, Van Morrison, Led Zeppelin. Then of course there’s the old standards. Glenn Miller, Artie Shaw, and, Oh my God I must be getting old because I knew Count Basie. But from Big Band, Blues, Jazz. My rap records from the eighties. It’s all down there.

Some of my friends don’t get it, and that’s fine, people are busy, space is limited. Not everyone wants to spend their time in an musty basement, playing the records of yesterday. They say that all these songs come on the radio, and that may be true in some cases. But knowing my dad saved Midnight Serenade from the tile floor of an old AM radio station that is now demolished gives me a little bit of nostalgia that can’t be found on IHeart radio.

It’s that crackle and pop between songs, that dusty groove of Otis Redding or Marvin Gaye. Like I wouldn’t want to fire up those old spray painted Toa speakers, the ones hauled around town every weekend thirty, forty years ago so that he could keep the lights on at home, so that we could have Christmas. Heavy or not, scratches and skips, spray painted or not, I wouldn’t change them for the world.

So I’ll gladly play curator of my past. I’ll turn on the lamp in the radio, flip through the dusty wax and find just the right track, maybe I’m on Fire by Springsteen, or Take the Five Train by Duke Ellington, I’ll take it every time I can get down the steps to relive some magic.