In Here, Out There

Part of being a parent—besides vacuuming up Goldfish cracker crumbs—is creating a safe place for a child.

Not quite three, my son is blissfully unaware of the news. And by news I mean all the crummy things happening in the world. He knows our house. His books. Toys. A couple of cartoons. Entirely too much about lawn mowing. And now he's discovered chocolate, so, life is good.

But when I turn on the television, ready to flip on Curious George but then pause because something in the news has caught my attention--maybe a headline about another mass shooting, or a bombing or a protest, could be a manhunt or kidnapping, wreck, hostage, drowning, fire, flood or famine--he’ll call to me, with wondering eyes that beg to know what I’m doing. Then I remember. The cartoon.

Recently I came across a speech from years ago. Reagan, addressing the country before we bombed Libya. It was posted it on Facebook for some political reason or another, but I found myself remembering that speech. More specifically, remembering the exact moment.

I was a kid, in our basement of our little house.The good old 1980's, back when the world was great. At least for me. My parents had bills and worries and the world had crime and injustice. But for me, everything was GI Joe and Knight Rider. The Cosby Show, Family Ties and the like. Our house was my refuge from school, the world....you know, Out There. 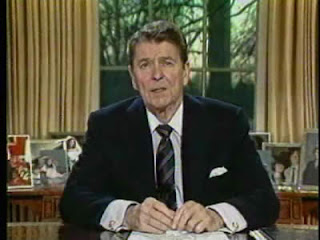 But in our basement that night--with Reagan, going on about those strikes on Libya to oust Gadhafi from power and how the middle east was in turmoil--a big old chunk of Out There cut right into my regularly scheduled programming. And it was a little bit scary.

Who knew the world was such a mess? Not me. Not then. I was surrounded by love and music. Allowed to be a kid, to do goofy kid things and build forts or complain about a tear in my parachute pants. How I needed a new pair of sneakers.

But that Reagan moment sticks out because of that brief glimpse of out there all over my parents' faces. Silent and glued to the television, just for a second, just like me when I hear about things going on out there now. I was safe because my parents made sure of it.

Now it’s my turn. Even though things move quicker now—at least the news does. But it's my job to create In Here, and let Out There come later. He'll get plenty of it later...

For the past two weeks there’s been nothing but the talk of boots in our house. Not just any boots. The little boots I left on the roof of the car after we got pictures done. The pictures that were taken at a farm off of a winding, unmarked road.

Before bed. “Daddy left my boots on the car.”

Upon waking up. “Daddy, I want my boots.”

Mom’s gotten in on the action too. “We should go look for them."

"But they aren’t in stock now, and all the other boots are expensive."

My wife knows how I work. And she knows that the mere mention of expensive—set to the backdrop of my son’s pouting was enough to do the trick. So Saturday, he and I loaded up in the car and went on a frivolous boot search.

He was still in his pajamas. Although he was wearing his rain boots. Lucky for me I hadn’t left those up on the roof or there would have been hell to pay. Honestly, I was only going to search so that I could say that we’d searched. It was drizzling and wet. A gray morning that was better suited for sleeping in. Yet I was going to comb the side of the country road for boots.

Like I was saying, the farm is about 20 miles away. Tall grass and fencing on either side. Cows. Horse poop. Did I mention it was raining? Okay, good.

We pulled into the driveway. I handed my son a baggie of oldish to occupy him while I roamed the side of the road. He was still buckled in his car seat and content to nibble while did things you just have to do when you're a dad.

Sprite bottles. Fast food. Wrappers, beer cans. I glanced back to the car, safely tucked away at the entrance to the farm.

A few more steps. About to give up when, a boot! Sticking out of the tall grass. My eyes lit up. “No effing way.”

A car sped past. I turned to see our own car, getting small in the distance. Not good. I needed to hurry up and find the other boot. Energy drinks. Coffee cups. Man, people really like to litter. But there was no time for high horses or soap boxes....I needed the other shoe.

And then there it was. The other boot. I picked it up and turned around. Sprinted to the car, elated that I would be able to get to sleep guilt free tonight. I slowed down, tapped on the windo to to the car. My son’s face lit up like Christmas morning.

Then he went right back to the goldfish.
Posted by Pete at 9:41 AM No comments: