Charlie over at Carrot Ranch hosts a weekly flash fiction challenge. This week's prompt is to write about a rare gem in 99 words, no more no less. Mine came to mind immediately: 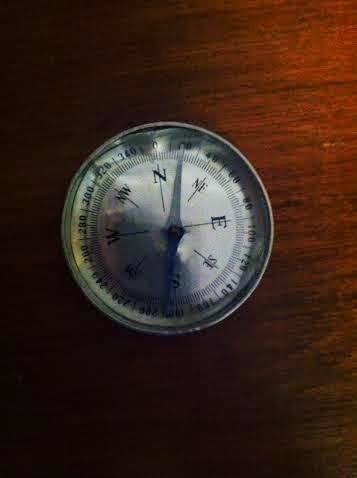 I have this old compass. It’s dull and dented and the needle is stuck. On the back is a crinkled print of Indian Head Mountain, a fading sunset behind clouds hardly distinguishable from the peeling edges of the sticker.

To a collector it’s worthless, a trinket from a gift shop that found its way into my grandfather’s pocket. And yet, it works beautifully.

It navigates my own faded memory, back to when the needle aligned and the picture was clear. It points to those fuzzy moments etched in the wrinkles of my childhood. It’s magic, that compass, pure magic.
Posted by Pete at 11:59 AM No comments:

Our empty expressions give us away. Because we haven’t seen it. Not at the theater, online, or even on cable. And not because we're one of those elitist I don’t watch tv types, because we most definitely are not. I remember the good old days spent on the couch, watching episode after episode of Dexter or Weeds. Or eating dinner while watching Jeopardy together, pop in a dvd. We were a couple of maniacs, I’ll tell you.
It's just that there's no time.

Most parents can relate to the time dilemma. Some with a whole herd of kids might even laugh. But still, we like to get stuff done, projects and things around the house. And nap time is our only chance. We're like a Home Depot commercial. Ready, set go! (but go quietly). When that kid is napping, it’s time to break out the shovel. I got posts dug in the backyard during one nap, fencing put up during another. We can paint, fix, clean, even break out the tools without a knee high helper constantly shouting, “My turn?”. On a good day we get a couple of hours, but usually it’s more like 60-90 minutes, so make the most of it.

Not that we don’t include the kid in our activities. Trust me, we do. You should see this kid with a leaf blower. It’s just that every once and a while we need to do things without such help. And we can’t waste it on television. Recently our cable bill went up so we downgraded to the limited basic channels, which consists of the major networks plus fifteen church channels with scary people yelling at us and trying to sell $100 bibles and four Home Shopping networks.

And the weirdest thing is, I don’t really miss it, I mean really, I survived college football season without ESPN. Amazing. We also cancelled NetFlix maybe a year ago, putting us dangerously close to falling off the grid all together.

But there’s always prime time, after the kid is asleep, right? Well, maybe we’re doing something seriously wrong here, but when our kid hits the crib at 8, we’re not far behind. Sure, I could stay up and party, watch Dancing with the cows or How to get away with Involuntary Manslaughter, but I’d only be paying the price the next morning when he’s up at 6am, or even earlier. So nighttime tv is out as well.

And, as much as twenty something me would moan at the thought, but maybe those non tv snobs are on to something? I mean, without the television, I’ve found that music can be wonderful. We go through a range of stations on Pandora. Some nights it’s jazz, and my wife and I can pretend we’re at a fancy restaurant. Other nights we listen to a little Jack Johnson or maybe some Ben Harper. We’re going to hold off on the DMX for now, but everything else is on the table.

Now when I watch television I’m so annoyed by Title Loan commercials or blaring car dealership ads. I must have been immune. I can’t take it, I’d rather listen to my kid and my wife, and maybe a little jazz music. Oh dear God, what has happened to me?