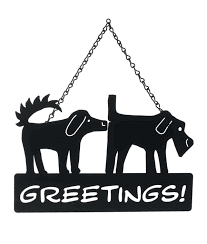 The four-year-old is often described as bossy and argumentative, who often tests your boundaries with unacceptable behavior…The child intentionally uses language that is upsetting to the parent.

Try not to overreact.

"Hey Poop," my son deadpans in the morning. "Daddy's a poop!" he shouts when I won't cave to his demands for a late night snack. "Goodnight poop," he murmurs just before bed.

Endearing, isn’t it? And completely normal if I’m to believe the doctor’s office.

The only problem here is that instructing me not to overreact is like telling a bear to roller skate. Now, you might be thinking, I saw a bear on TV roller skate once, they can be trained. But you’d be missing the point.

My wife and I are under the delusion think that maybe since our son can’t say poop at school (apparently, they are overreacting), he’s just getting his fix at home. In those few hours between getting home and going to bed. I mean, there’s a lot of missed “poop calling” opportunities in any given day. And besides, it's mostly just Dad getting uh, pooped on.

Well, and that nice cashier at Lowe’s.

The plummer. But you can't really blame him there.

The way I see it, it's a term of endearment. A nickname. And even my wife puts up with it. And she never overreacts.

Lately, I’ve noticed something about her and this kid of ours. Normally a rational woman—my wife is a teacher, a molder of young minds, she has a degree in children’s studies and years of experience dealing with the deviancy inner workings of young minds. And yet I've seen her completely abandon everything she's learned when it involves our son.

A mother to the core, she looks at our kid and sees the cutest, sweetest, most thoughtful human being in the world. Like the other night, our thoughtful son mooned me and she lauded his flexibility.

And that's fine. I'm glad she's got his back. And I get what the doctor’s office is saying. If we make a big deal out of of poop talk It only makes it that much more tempting. And he could be saying worse, you know?

The flip side is that I’m a human punching bag. My son calls me poop. Or sometimes pee. I kiss him and the first thing he does is wipe his cheek. And I while I've spent a few hundred words making it sound like he’s a monster, he’s not. He is sweet. He’s awfully cute. And he can be thoughtful, in a boy and his father type of way.

Yesterday. I was outside trying to fix his bamboo tee pee (Dad you said pee!). We’d just returned from a walk and it was nice out and we'd had a good time together when he had to go, you know, poop. So he was in the bathroom, taking care of business when, from the open window I hear,

My kid, up there pooping, felt the need to tell me he loved me. It was pretty special...