It finally happened. I lost my kid.

I used to joke about losing my son, but on Saturday, getting in some father and son time at the kids’ museum, the joke was on me. 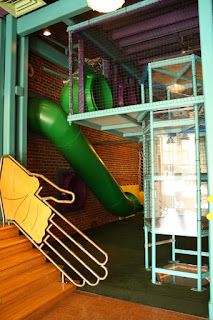 We go all the time. My son knows the layout. He probably knows all four floors as well as he does our own house. But it was busy that day. With big kids and chaos.

My kid likes the slides and nets and the tunnels that connect the floors. Usually, I crawl through with him because, well, I’m a responsible adult—not just some man/boy looking to have a good time.

But on Saturday, the place was jumping with birthday parties, big groups of big kids. Ten-year-old’s by the platoons. And there’s my guy, not quite four, ready to go.

I climbed up the first ladder with him, absorbing kicks to the head because some ten-year-old’s don’t know how to wait for old people. Anyway, I peeked in the tunnel. It was a mess. It was hot. The smell of feet ruled the day. I could hear the echoes of kids in the bowels of the museum. It would have been a good time to look at my little guy and tell him we’d sit this one out. Maybe go sit on the horsey or play at the barn. I miss the barn. The slow crawl of the little kids. The plodding toddlers who couldn't vanish just when you.. hey wait.

He was off. My kid was having none of that barn talk because he was going in. And maybe I was trying to prove to myself that I was a big kid’s father. So I took a breath and watched. I've never been a watcher. I've been a hoverer, a follower. A participant. But on that day I merely watched, as he scooted to the first tunnel. I winced, as arms and legs flew all over the place. In the heat of the moment, I shrugged. Okay, I’ll meet you at the slide. Right here.

And then my little Nemo was gone.

What have I done? He's just a little boy! He's not even four yet!

Two minutes later I was climbing up and going in. He was really gone. I pictured him, curled up and scared in the darkness of the tunnels. Gripped with panic, I fought my way through the feet and knees coming my way.

I called for my kid. Nothing. I ran down to the next level. He wasn’t there either. My heart pounded, thoughts of those heathen kids trampling him. I ran back up the tower and plunged into the tunnels, calling out frantically. I may or may not have jerked a few kids out of the way. I scooted and wiggled, boot camp style through the tunnels. Still no kid.

Back down to the next level, by then I noticed a huddle of mom’s deciding whether or not to laugh at me. But I had no time for them, searching through the sea of kids, I still couldn’t find him.

And that was when my wife showed up at my elbow. Smiling.

Smiling. How could she smile at a time like this? And who is she waving to? Oh, up there. My kid. Right there.

I’m coming, little buddy! I dashed up and hugged him. He smiled. "You didn't know where I was?"

He was unscathed and unfazed by it all. And I was proud of him, the way he handled himself. I hear a lot about kids with older brothers having to keep up, and maybe he was just keeping up with the older kids. But for a few minutes, I was terrified.